England’s Tom Lewis has won the Korn Ferry Tour Championship and secured his PGA Tour card for next season.

Lewis, who led the field at 16-under to begin the final round, went 7-under 65 to finish the tournament 23-under, five shots ahead of Argentine’s Fabián Gómez in second. 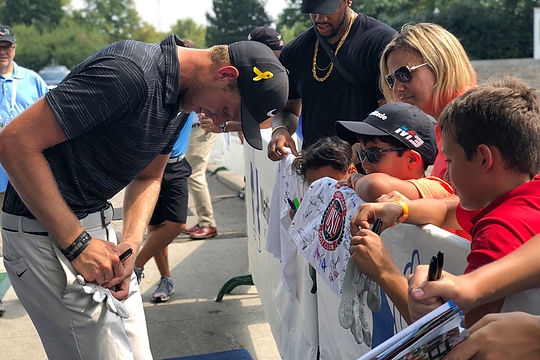 The 28-year-old is ranked No. 85 in the Official World Golf Ranking and got into the Finals in the FedExCup 126-200th non-member category by virtue of his T11 finish at The Open Championship in July.

Lewis came into the Tour Championship at T82 in the standings and needed to make his move early which he did with rounds of 68-66-66-65. Monday’s final round was his best of the week, featuring eight birdies and one bogey.

With the win, Lewis will have to decide how to manage his schedule now as he has status on both the European Tour and the PGA TOUR.

The top 25 Korn Ferry Tour players had already locked up their PGA Tour cards back in August at the conclusion of the regular season.

Over the last month the remaining players have been battling it out over a three-tournament Korn Ferry Tour Finals series that began with the Nationwide Children’s Hospital Championship, then headed to the Albertson’s Boise Open, and concluded with Monday’s final round of the Korn Ferry Tour Championship.

Twenty-five additional PGA Tour cards were up for grabs for the top qualifiers throughout the Finals series. Australia’s Rhein Gibson had already secured his card from the regular season, but Cameron Percy and Cameron Davis made their move in the final series to qualify for the main tour.

Davis produced some stellar rounds of golf right when it was needed firing scores of 68-73-69-67 to finish in a share of 13th position in the Finals and move from T34th to 21st in the standings, inside the desired top-25.

Davis’ final round 67 ensuring the 24-year-old remains on the main tour after finishing 160th on the FedEx Cup standings.

Curtis Luck, who missed the cut, fell all the way from No. 15 to T-29 in the standings to miss and will be playing the secondary tour for next season following finishing 175th in the FedEx Cup standings.

Brett Coletta was another casualty after being close to reaching the top-25 standing in the season proper, but fell away to T66th in the rankings with several poor finishes late in the season.

Jamie Arnold missed the cut in the finals and moved from 18th to 36th in the standings in what will be a bitter blow after being so close to graduating to the main tour.