England’s Tom Lewis took the prestigious St Andrews Links title by four shots with rounds of 68, 74, 70 and a superb final 67 around on the Old Course for an eight under par total victory over Bolivian Sebastian MacLean, Welshman Rhys Enoch and Dutchman Daan Huizing.

Lewis overcame a three shot deficit heading into the final round to secure his first main amateur stroke title. 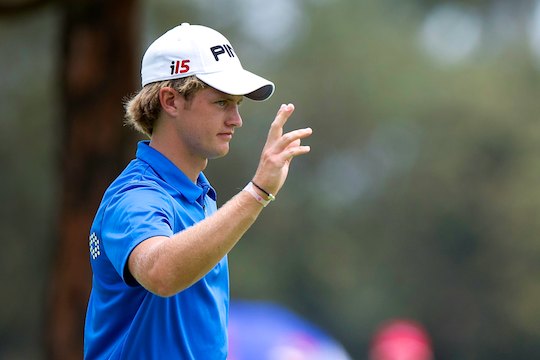 In 2010 Lewis was England’s top-ranked player and secured a second place among the professionals in the New South Wales Open last December. He also took medallist honours at the Australian Open that summer as the top amateur and made the cut to win the Silver medal at the Dubai Desert Classic earlier this year.

“I’d had a pretty slow start to this season and was waiting to get started but this is obviously a great win,” said Lewis, who credited the win at St Andrews to his father.

“My dad always thought that I would one day win this event as an amateur because he thinks the Old Course really suits my game and shape of shot, so that was a pretty solid prediction in the end.”

Lewis will remain as an amateur to play in the Walker Cup at Royal Aberdeen if selected, although that would appear a formality given the world number three’s fine run of form. Lewis is also targeting a place in the British Open at Sandwich, where he won the British Boys’ title in 2009.

He then went on to reach the quarter-finals of the Spanish Amateur championship and was runner-up at the Welsh Open Amateur Championship in the same year.

The world number fourteen was the best of the Australasians.

Campbell, who is based in Melbourne, went into the final two rounds a stroke behind second round leaders, Netherland’s Daan Huizing and Argentina’s Franco Romero, yet felt he let his chances slip over the closing stages of the tournament and failed to capitalise on his second round position.

“I closed out this event a little poorly,” said Campbell, who was still recovering from the effects of a stomach bug he contracted a fortnight ago upon arriving in Scotland.

“Overall it was pleasing and I’m feeling my game is there. I’m over the sickness and in patches play some good golf. That gives you the confidence to head into the amateur knowing that you are striking the ball and putting well.”

Three Australians were among the forty qualifiers to make the final two rounds at the Old Course with Daniel Nisbet finishing in a tie for 14th position, some ten strokes behind Lewis at two-over-par.

The Australasians will now prepare for the British Amateur championships starting 13th June to be played at at Hillside and Hesketh in England’s north west.