Local favourite and two-time European Tour winner Haotong Li has rocketed to a one-shot lead in the WGC-HSBC Champions in Shanghai following a first round 8-under 64.

Li fired off five birdies in his opening nine holes before making the turn with a bogey, eagle and birdie at his 10th, 11th and 12th holes.

“It was pretty good start today and it will be absolutely great for Chinese golfers and Chinese golf fans to have a Chinese player winning a WGC-HSBC Champions here in China,” Li said. “But for the next three days, anything could happen.”

“I don’t want to think too much about it. I just want to focus and concentrate on the upcoming three days because anything can happen.” 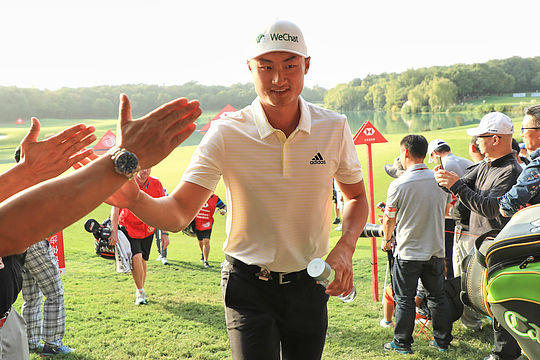 Li closed one shot ahead of France’s Victor Perez, who claimed his first European Tour title just a few weeks ago at the Alfred Dunhill Links Championship.

Another shot back in a four-way share of third place at 6-under are Adam Scott, Sungjae Im, Matt Fitzpatrick and defending champion, Xander Schauffele.

Scott was unlucky not to have a share of the lead but a lone mistake at the last hole saw him scrambling home for a bogey-5 to add to his impressive seven birdies.

Coming off a solid third place at last week’s ZOZO Championship, Rory McIlroy, kicked off his campaign slowly with three bogeys across his opening nine holes before he reeled off four straight birdies to put himself well in the mix with a 5-under 67.

“Sometimes you feel it a little more [momentum] than other times and definitely got to momentum on that back nine today, and tried to sort of ride that to the very end,” said McIlroy.

“The last few tournaments I’ve played, I’ve had a bad opening round and then been trying to play catch up. At least now, I’m right in the thick of things from the start, which is a better place to be.”

Matthew Millar was the next best of the Aussies after Scott and closed with a round of 3-under 69 to sit in equal 14th with Jake McLeod and Cameron Smith a shot back at 2-under.

Scott Hend (T70) and Daniel Nisbet (77th) were the only other Australians in the no-cut field.