South Australian Jason Norris’ life changed with a drop of a putt as he won the Fiji International at the Natadola Bay Championship Golf Course.

Tri-sanctioned by the ISPS HANDA PGA Tour of Australasia, European Tour and Asian Tour the 44-year-old journeyman now has the golfing world at his finger tips. 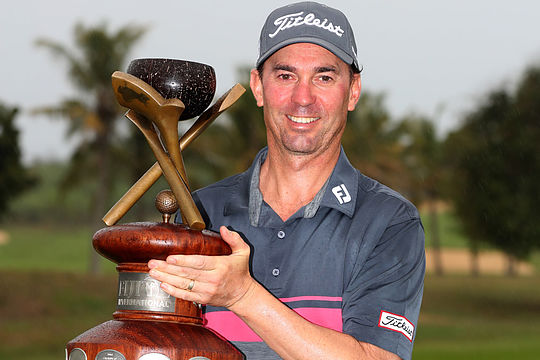 It’s an incredible change for the man who, up until last week, was working at the Grange Golf Club in Adelaide and on the edge of giving the game away.

“Today I felt good, I felt like a champion,” said Norris, who now has his pick of tournaments in Europe and Asia.

“I said a couple of years ago when I was about to quit, that I didn’t want to give it away until I had won a big tournament because I know I can.”

“I told the boss last week that I have probably two years left playing golf and I just want to have a crack. This came up quicker than I thought.”

“It’s unbelievable. It’s good to see you all on Sunday instead of on Thursday every time,” said Norris, who opened the final round with a birdie and never looked back.

“I think it was just our week, everything aligned and putts dropped and some good shots came, it was amazing.”

Freely admitting to suffering from the yips, at times this week Norris used three different grips per round but today everything clicked.

“Today I used backhand grip all day. I putted well with the grip on the back-9 yesterday so I stuck with it,” added Norris.

“I putted sensational all day; even the ones that I three putted were just bad speed.”

Four shots back was the fast finishing Jazz Janewattananond. Having made the cut on the number the Thai star set the course record at 8-under 64 in the final round thanks to a long eagle putt on the par-5 17th.

“I am just really happy to put up a good score. It’s always good to shoot a bogey-free round. I couldn’t make any putts in the first two days but I had been hitting the ball good all week. I managed to sink some putts today and yesterday and I guess that was the key,” said Janewattananond.

Joining him in a tie for runner-up are Australians David McKenzie and James Marchesani.