China’s Yuxin Lin put on an impressive display in front of home fans when he birdied the par-5 18th twice in a playoff to beat defending champion and world No. 1 Takumi Kanaya from Japan to become the second two-time winner of the Asia-Pacific Amateur Championship.

The pair finished 10-under-par and entered the first-ever playoff in the championship’s history. Both birdied the first extra hole, No. 18, in a display of aggressive power. Lin muscled his ball out of thick rough with almost no stance, while Kanaya sank a 30-foot putt to keep his chances alive. 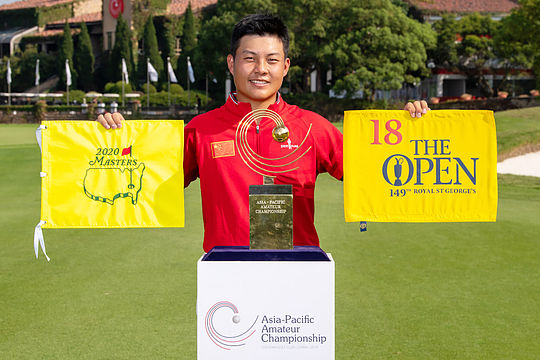 After they returned to No. 18 for the second extra hole, it was all over when Lin hit a superb third shot from the greenside bunker to three feet and made the putt, while Kanaya missed his from a longer range.

Lin with the victory earned an invitation the 2020 Masters Tournament and the 149th Open at Royal St George’s in 2020. The 18 year old is now based in Los Angeles as a freshman at the University of Southern California and will focus on the US system.

“It definitely means a lot to me, especially this week, winning at home is certainly huge for me and for China golf, as well. I’m just really honoured to be alongside Hideki as a two‑time winner,” said Lin.

“I didn’t really think about the win. I was just trying to play some good golf out there. I made some mistakes throughout the round but stayed patient the whole time.

American-based Karl Vilips was the best of the Australians finishing at 7-under and in a share of 8th position. Vilips is certainly showing the benefits of being linked with the US system having secured recently a strong performance at the US Amateur.

With Blake Windred and David Micheluzzi having announced their move to the professional ranks, Vilips becomes our highest ranked work amateur, with a R&A ranking currently at 44.

Windred, who opened with a 63 to lead the championship, carded further rounds of 71-74-76 to finish in 13th position at 4-under and six behind the leaders. Micheluzzi and Nathan Barbieri finished at 2-under and in a share of 15th position.

Jack Thompson finished two strokes further back at even-par in a share of 21st. Kyle Michel’s amateur career came to a close with a 78 in the final round, the Victorian moving to the second stage of European Tour Q-School next month.

Michel recently became the first Australian ever to win the US Mid-Amateur.

In 2020, Asia-Pacific Amateur Championship returns to The Royal Melbourne Golf Club, which previously hosted the event in 2014, and is set for 29 October – 1 November.

A side benefit of being the host country will mean that the Aussies will be eligible to enter a field of up to 10 players. Australian has two past champions, Curtis Luck (2016) and Antonio Murdaca, who won at Royal Melbourne in 2014.