Chinese players dominated the final standings of the Asia-Pacific Amateur Championship finishing with four of the top-5 places at Royal Wellington Golf Club.

Yuxin Lin stormed home with a birdie, eagle finish to card a final round 65 to finish at 14-under for a three shot winning margin over fellow compatriot, Andy Zhang. 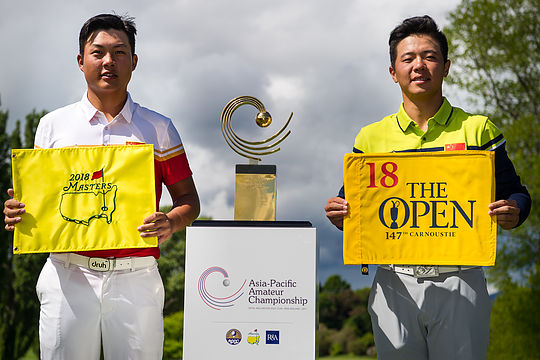 Lin was simply impressive as he closed this tournament out in style with precision driving and majestic iron play to shut the gate on his nearest competitors.

Lin began the day at 8-under, one ahead of playing partners Aussie Min Woo Lee and Zhang, China’s top-ranked amateur. Lin’s powerful driving display certainly gave the 17-year-old the upper advantage as he peppered the fairway with a bold display of line and length.

“I was just trying to stay aggressive,” said the world number 338.

“My plan was to hit like as many drivers as I can throughout the round, even though I was not hitting it that well for the first 12 holes, but I still stick with that plan.”

Over the closing three holes, Lin simply outplayed his rivals and is a worthy winner of this coveted amateur title.

He will be the third amateur to represent China at Augusta National (and the first to play in The Open), the spoils of victory from this tournament which was co-founded by the Asia Pacific Golf Confederation, the Masters Tournament and the R&A.

Fellow countryman Zhang had nothing but praise for the state of golf in China.

“It shows you how good China is getting at golf,” Zhang explained. “The next generation is coming up and China will be a big country up there.”

The Chinese simply blasted the other nations off the course, including the hosts New Zealand and the impressive team from Australia, who had invested heavily in this event in the hope of success.

As for the Australians, Min Woo Lee played stellar golf all week, as did Shae Wools-Cobb. Both held the lead at one stage during the tournament and had their chances to make moves. Yet it would not be their tournament. Errant drives around the tight Royal Wellington layout proved costly for both the Aussies. Fairways were at a premium, as was distance control into the greens.

But to the 2016 US Junior champion’s credit, Lee would finish in a tie for third position alongside China’s Yechum Yuan, seven behind Lin after firing rounds of 67-68-71-71.

Wools-Cobb started here in Wellington on Thursday with a sensational 8-under 63, and went on to card rounds of 74-71-71 to finish at 5-under and a tie for 6th position along with New Zealand’s Daniel Hillier and another Asian player, Chun-an Yu. Wools-Cobb certainly can take much away from this tournament.

Harrison Endycott mounted a late Sunday charge with a final round 66 to finish at 3-under seeing three Aussies inside the top-10.

Dylan Perry finished in a tie for 15th at 1-under, with Travis Smyth in a tie for 24th position at 2-over. Charlie Dann rounded out the six-man Australian contingent in a tie for 52nd place at 10-over.