The rise of China as a force in men’s and women’s golf continued to gather momentum as rising star Xi Yu Lin dominated the field with a five stroke victory at the Sanya Ladies Open in Hainan, China.

The 18-year-old fired rounds of 68, 67 and 67 in hot and windy conditions for a 14-under-par total to become the first home winner in the five years of the tournament, which is tri-sanctioned by the Ladies European Tour (LET), China Ladies Professional Golf Association (CLPGA) and Ladies Asian Golf Tour (LAGT). 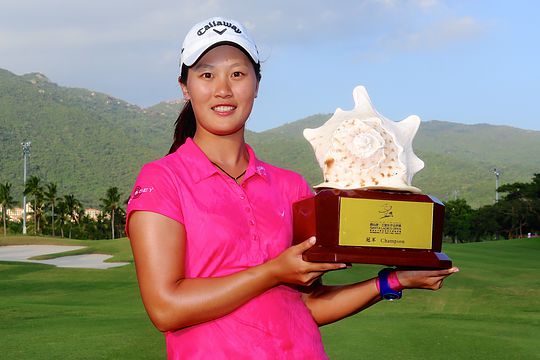 Lin finished ninth in the inaugural Sanya Ladies Open in 2010 as a 14-year-old amateur and has never finished outside the top-10 in the tournament. This year, she came to Yalong Bay fresh off her fourth professional win on the CLPGA, at the previous week’s Sanya’s Hills Classic.

“I think this is the biggest win of my career because it’s my first win on the Ladies European Tour,” Lin said. “My mum was with me this week and she always brings me good luck, because in 2012, she came to watch me for the first time in two years when I won my first professional career win on the CLPGA.”

“This time she came and I earned my first win on the Ladies European Tour, so I think she’s kind of my lucky star.”

England’s Charley Hull, also 18, had a final round of 69 to complete the event at 9-under in solo second place.

Australia’s Nikki Campbell and Huei-Ju Shih of Chinese Taipei finished in a share of third place on 8-under and in a tie for fifth were China’s Yu Yang Zhang and Jienalin Zhang, the leading amateur.

Campbell has now notched an impressive ninth top-ten finish in 16 events on the Ladies European Tour this season, good enough for sixth place on the Order of Merit.

All that’s missing from her resume is a win on the LET and she has three remaining opportunities in 2014, starting at this week’s Xiamen Open at the Orient (Xiamen) Golf & Country Club.