The 28-year old Swede leads by a stroke at 3-under from a group of six players at 2-under par, with a further five players at 1-under adding to an already top-heavy leaderboard. 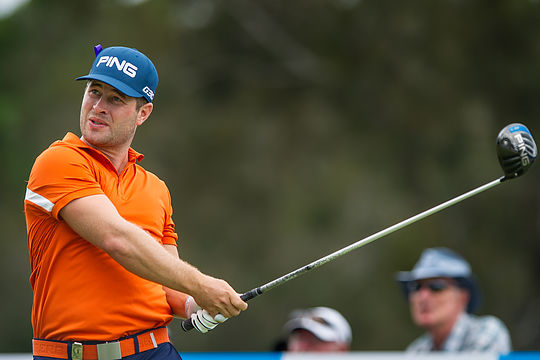 Lingmerth expressed some surprise at finding himself in this position, especially after his first hour on course in the tempests that swept the layout in the opening round.

“It feels kind of crazy in a way with how it all started yesterday,” Lingmerth said, “I three putted the first two holes and I was 3-over par and found myself at 4-over after like 4 or 6 holes.”

“Here we are after two rounds and not only do I have a chance, I guess I’m right at the top there. So it’s kind of weird.”

Only two players broke 70 on Thursday but Friday’s scoring started to take on a more ‘normal’ appearance for this calibre of field, not that the conditions were calm by any stretch.

Sitting at 2-under are England’s Mark Foster, the South African pair of first round leader Zander Lombard and Dylan Frittelli, Spain’s Pablo Martin Benavides, the consistent Matthew Millar from the ACT and American Peter Uihlein – who shot an impressive 5-under 67 today.

Playing early and posting a remarkable course record 8-under par 64 was Lismore’s Rhein Gibson, who channelled a little from the memory of Rod Pampling’s 61 in the final round of the Australian Open last week after opening with consecutive bogeys to start his second round.

“I started bogey, bogey to go to 9-over for the tournament and yeah, really didn’t want to be here. (I) thought back to Pampling’s round on Sunday, he bogeyed the first and shot 10-under around the Aussie.” Gibson smiled.

After opening with 79, Gibson’s 64 lifts him into the group sitting at 1-under par just two strokes behind Lingmerth. Included in that group were Australians Todd Sinnott, Jason Scrivener, Ashley Hall and Kiwi Ryan Fox.