American David Lipsky has taken out his second European Tour title with victory at the Alfred Dunhill Championships in South Africa.

Lipsky fired a final round 68 at the Leopard Creek Country Club to finish at 14-under, two shots clear of Scotland’s David Drysdale. 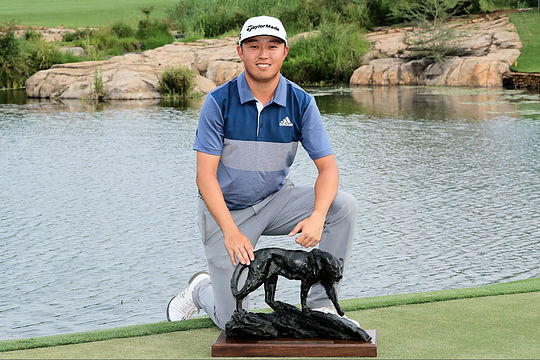 Overnight leader Scott Jamieson dropped into third with a par round, finishing at 11-under-par alongside home favourite Zander Lombard.

Lipsky put on a solid display of consistent golf to add to his earlier win at the Omega European Masters back in 2014.

“I didn’t make too many mistakes, my putting and wedge play was probably the best it’s ever been,” said Lipsky.

“It’s a very difficult course but I toughed it out. This is my first time here so I hadn’t seen the course before.”

Lipsky held a six-shot lead at one point in the final round and was still four ahead on the 16th tee. He made double bogey on the par-3 16th but had enough of a cushion over the final two holes. A birdie at the last enough to secure victory and a check for just under US$270,000.

The win is a marked turnaround for Lipsky who struggled to post just a singular top 10 last season and finished outside the top 100 on the Race to Dubai.

“This was a tough year for me. I haven’t played that well and have really struggled. To cap it off with a win at the end of the year is so special and I’m really looking forward to big things in 2019.”

Drysdale has three runner-up finishes since joining the European Tour in 2002 but has yet to notch his first win.

“Overall good performance, delighted with my week,” said the 43-year-old, who closed with a 5-under 67. “Tee to green last two or three months has been very good.”

European Tour rookie Victoria’s Deyen Lawson shot 70 in his final round to finish 14 shots off the lead in 47th place, while Dimi Papadatos carded a fourth round 73 to finish in 51st place.

Despite the end result, it was a great tournament for Lawson, who won a BMW car worth more than $250,000 after sinking a hole-in-one on the par 3, 16th in the final round.