Spain’s Adrian Otaegui fired a closing round 68 for a six stroke win at the Andalucia Masters at Real Club Valderrama on the DP World Tour in Spain.

It was Otaegui’s fourth DP World Tour title having begun the the final day with a six-stroke lead, he carded a mix of four birdies with one bogey. Otaegui opened with rounds of 67-66-64, making only three bogeys the first three days to take his commanding lead.

His final score of 19-under set the new 72-hole tournament record at the 1997 Ryder Cup venue. Sweden’s Jaakim Lagergren finished in outright second position at 13-under-par.

“I feel so happy to have my first win in Spain in front of these crowds on my favourite golf course in Spain,” said Otaegui. “It’s just unbelievable. I’ve very, very happy with everything. It’s just the week went perfect.”

Otaegui’s victory, two years on from his last at the Scottish Championship, also sees him climb to tenth in the DP World Tour Rankings. Otaegui, 29, played three of the first four LIV events but it is not clear if he will play in any further tournaments. His best result in a major so far was a tied 65th at the 2018 PGA Championship. 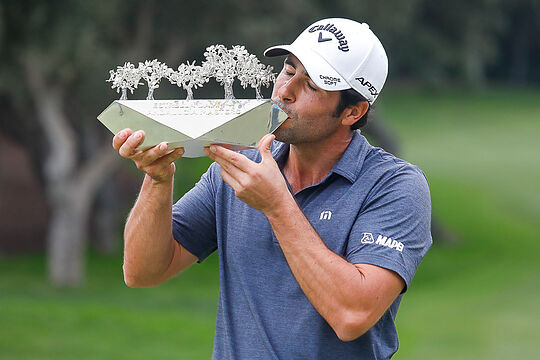 Min Woo Lee finished the best of the Australians in outright third at 10-under-par. It was Lee’s second consecutive third place finish after his earlier result last week at the Spanish Open. In just two weeks Lee has earned just under €300,000 (A$468,000) and is on the verge of breaking back into the top-50 in world rankings.

Maverick Antcliff finished in a share of 21st position and was the only other Aussie to make the weekend. Jason Scrivener and Scot Hend missed the cut.

The DP World Tour remains in Spain for the third week in a row for the Mallorca Golf Open scheduled for this Thursday at the Son Muntaner Golf Club.