With 2023 fast approaching, LIV Golf’s rumoured trip Down Under next April needs to be locked in sooner, rather than later.

Venue names across the eastern seaboard have been passed around with the likes of Royal Sydney Golf Club quickly knocking the idea on the head. 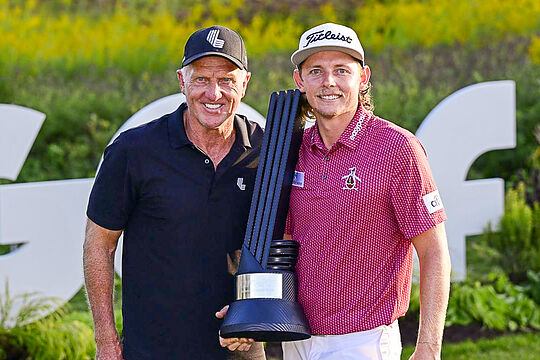 Now a report by The Age suggests that the entirety of Victoria is off limits thanks to a cosy relationship between Premier Dan Andrews and PGA Tour head honcho, Jay Monahan that developed when the Presidents Cup came to town in 2019.

Andrews, a self-confessed golf tragic, has apparently chosen to maintain an alliance with the PGA Tour and PGA Australia rather than take a chance on the breakaway Saudi-backed league.

“No talks or negotiations have taken place between the government and LIV Golf league representatives,” a Victorian government spokesperson told The Age.

Thankfully we are lucky enough to have a host of different options available in Australia. And while the world-famous sand belt courses are now out of the question, Adelaide has a few options up its sleeve too.

LIV Golf CEO Greg Norman won his first major local title (West Lakes Classic) in 1976 at The Grange in west Adelaide and returned in 2012 to redesign the layout so it comes as no surprise that the course is rumoured to be a front-runner to host the inaugural Australian event.

And it also helps that the new SA Premier appears to be a LIV Golf fan.

“I think it’s about time golf had a bit of a shake-up. So to that end, I wish LIV Golf all the best.”

Of course both Norman and Cameron Smith are proud Queenslanders so there’s every chance the tournament may end up heading north but for now the options are wide open and that’s a good thing for Norman as he attempts to take LIV Golf worldwide.