Powerhouse Jon Rahm has gone to top of the Race to Dubai rankings overtaking Shane Lowry after storming his way to a five-shot successful defence of the Spanish Open in Madrid.

Rahm, 24, was in a class all of his own posting a final round 66 for a 22-under par tally on the Club de Campo course. 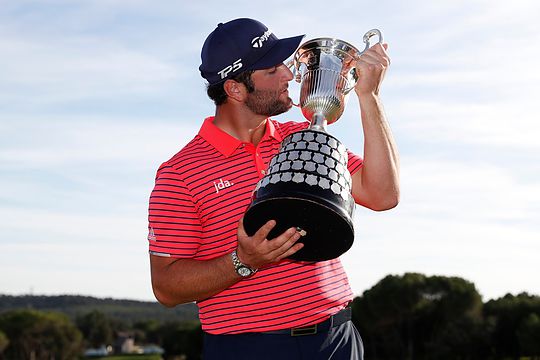 It was also Rahm’s ninth pro career success and his second this season after earlier this year winning a second Dubai Duty Free Irish Open title in three years.

In fact, it took Seve 49 starts to capture five European Tour titles and Rahm has done that in 39 starts.

Rahm set-up success thanks to Saturday’s stunning third round 63 that included an inward half of 28 in his eight-under par 63.

He took a five-shot lead into the last day and extended that to eight shots courtesy of a fourth hole eagle ‘3’ and then birdies at seven, nine, 10 and the 14th holes.

Compatriot Rafa Cabrera-Bello cut that to just five shots when he eagled the par-4 16th and Rahm then bogeyed the 17th ahead of Cabrera-Bello also shooting 66 to finish runner-up at 17-under par.

Though there was no denying Rahm, who returns to the States having now contested 12 European Tour counting events this year to be 83-under par for his 45 rounds of competition.

“I was not happy three-putting 17 as I wanted to complete today bogey-free but still the important thing I was able to successfully defend the title, and in front of a home crowd,” he said.

“It may not have been the strongest field this week but it is always really hard for to keep everything under control and to play the way I did over the weekend for them was great fun.”

“I can’t wait now to come back next year and do it three times.”

If he is successful in 2020, Rahm would be only the second Spaniard in 103-years to accomplish the feat while he would also match Ballesteros who won three Spanish Open titles.

Rahm arrived in the Spanish capital trailing 97 Race to Dubai points behind Lowry, who has spent this past week in ‘daddy care’ while his wife, Wendy was away for the week.

His win in Madrid has seen Rahm move 358 points clear of Lowry.

Lowry has been atop of the rankings since last July in capturing in the Open Championship but has been bumped back to second place.

Lowry, however, can rectify that at this week’s $US 7m Italian Open in Rome with Rahm and Lowry not teeing-up again in the same European Tour event until the October 31st starting WGC- HSBC Champions in Shanghai.

Jason Scrivener continued his solid form this season finishing as the leading Aussie in 7th place.

Dimi Papadatos was next best in a share of 23rd while Brett Rumford (T30), Jake McLeod (T49) and Deyen Lawson (T55) were the only other Australians to make the weekend cut.