First announced in early 2020 and originally planned for late 2020, the first stage of the DP World Tour Qualifying School finally got underway at the Rosebud Country Club on Victoria’s Mornington Peninsula.

It was the first time in almost 50 years that a venue outside of Europe has held a Qualifying School event and for seven lucky players, the decision could prove to be a life-changing moment in their golfing careers. 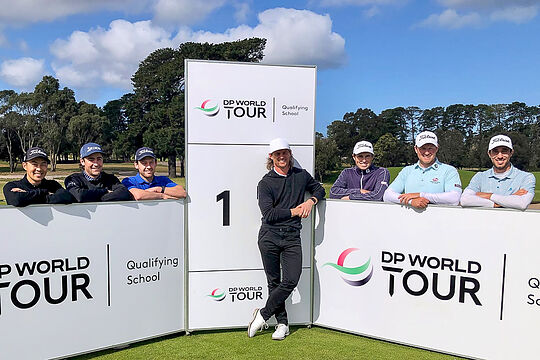 Rosebud local James Marchesani won the tournament on 10-under and by two shots from overnight leader, Tom Power Horan, who slipped back to 8-under after a final round 3-over 74. Also qualifying were Blake Collyer (7-under) and Lachlan Barker, John Lyras, Kyle Michel and Linus Yip (6-under).

Marchesani is no stranger to the DP World Tour. The Victorian has played ten mostly co-sanctioned events including a runner-up finish behind Jason Norris on debut at the 2017 Fiji International along with four other top-10 results that season.

However, the 32-year-old has been in golfing limbo since China closed its doors. Marchesani had carded two top-5 finishes in 2019 at the Haikou Championship and Haikou Classic to finish inside the top-40 on the PGA Tour China money list and keep his card for 2020 and was eyeing off a return to China or a tilt at the US via the Korn Ferry Tour.

“The last two years we’ve had, you didn’t really know where the golfing world would come out the other side,” Marchesani told PGA Australia.

“I had status on PGA Tour-China and things were looking great. I was prepped to go back up and fire again and try and get that Korn Ferry (Tour) card and then everything stopped.”

“My status was cancelled and I wasn’t really given any other options outside of that. Q-schools were closed for two or three years all around the world so it was a really weird period where you just had to tread water, keep your game good enough and wait for things to happen.”

All players now have access to the second stage DP World Tour Qualifying School in Spain in early November followed by Final Stage qualifying from November 11th, again in Spain, where they can earn a DP World Tour card for the 2023 season.