The next wave of Aussie young guns will have their opportunity to etch their name on the Kirkwood Trophy tomorrow with the Australian PGA title wide open for the taking.

Nathan Holman, Daniel Nisbet, Cameron Smith, Dimi Papadatos are all in with a chance, particularly Smith who’s coming off a stellar 2015 season in America. 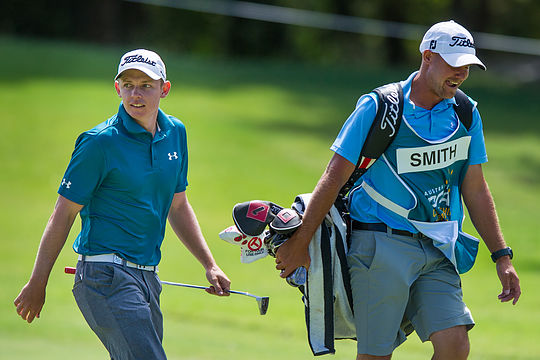 American Harold Varner III and South African’s, Dylan Frittelli and Zander Lombard currently sit at 3-under and two in front of Holman, with Smith at 1 over to be sitting just 4 behind the leaders.

Smith captured the Australian golfing public attention after qualifying for the 2015 US Open to go onto record a top-4 finish earning him an invitation to the 2016 Masters Tournament.

Smith drilled a 265-metre three wood to the 18th green at Chambers Bay and saw it curl around the tiered green to within a foot of the flag before he tapped in for the eagle that went onto secured him his playing privileges in the US for the next year.

Australasian Tour journeyman Matt Miller is also well within reach of the Australian PGA trophy. Millar is gaining a reputation teaching the next generation of gun players from his Golf Creek operation in the ACT and would love nothing more that to secure his profession’s main title.

Overnight leader Swede David Lingmerth struggled with the windy conditions to shoot a 3-over-par round to be par for the tournament and in a tie for 5th alongside Miller. The Memorial champion on the PGA Tour remains dangerous, but will need a solid final round to make his move.

This PGA Championship has evolved into the perfect opportunity for out Aussie young guns to stake their mark and to claim this title.

With a number of our marquee professionals electing to play in South Africa or being invited to Tiger’s event in the Bahamas, the door has swung open and an opportunity is presented.