Lonard back in the swing at Senior British Open

Aussie Peter Lonard has made a solid Senior Tour debut at the Senior British Open on Sunday in driving rain and wind at Royal Porthcawl in Wales.

Lonard fired rounds of 71-75-67-71 to share third position at even par with Billy Andrade and Fred Couples. American and former US Open Champion Corey Pavin finished in outright second position at 1-under. 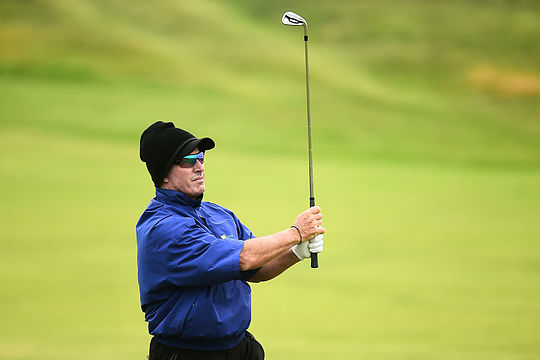 Bernhard Langer won the championship finishing at 4-under for his second Senior Open victory and his 10th senior major.

“Winning 10 senior majors, it’s not easily done as there is a lot of competition out there,” said Langer. “And maybe there’s one or two more in the future. But right now, I’m just going to enjoy the fruit of the labour.”

Lonard, who celebrated his 50th birthday on July 17, played stellar golf in his senior tour debut.

“Good to be in the mix finally,” said Lonard after the final round.

“It’s been a while. I felt good out there. I probably missed a few putts early on and then of course I missed that shot on the last, which isn’t going to make that dinner taste very nice tonight. That’s the way it goes.”

The result also brought back found memories for Lonard and it also seems to have rejuvenated his passion for tournament golf following a period of playing secondary tour events since losing his PGA Tour Card in 2009.

“I had high expectations,” said Lonard. “I was really looking forward to coming over here. The Open Championship was always one of my favourite tournaments. I think the last one I played in was Hoylake in 2008 maybe.”

“There’s so many shots, different ways to do the same thing. It’s great, imaginative golf and I was really looking forward to coming here.”

“I thought my game was pretty good. I was definitely a bit rusty with them as far as control goes, but it was great to be out here.”

Lonard joined the PGA Tour in 2002 winning over $1 million in his first season and won the PGA Tour of Australasia’s Order of Merit for a second time in 2003.

Victoria’s David Mckenzie fired a closing round 69, which included a hole-in-one, to grab a share of ninth place, while Peter Fowler was the next best of the Aussies in a tie for 15th at 6-over.