The Australasian trio of Peter Lonard, David McKenzie and Michael Campbell have narrowly missed out on victory at the Staysure PGA Seniors Championship at London Golf Club overnight.

Instead it was 2002 Ryder Cup star, Phillip Price, who took home the title following a final round 67 to secure his second European Seniors Tour trophy in three years with his previous win coming at the 2017 Senior Open. 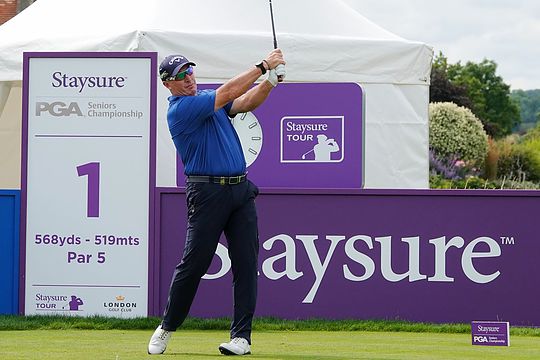 “This win is a little nicer than the first one,” said Price. “I’ve had my wife and two children here with me, and the children haven’t seen me win anything so that made it special. It’s nice to have them both here and nice to see me win something.”

“I’ve been playing quite well all year with a lot of top ten finishes but without a win, so this was a huge relief for me.”

2005 US Open hero, Michael Campbell, closed with a 67 including an eagle at his final hole to finish alongside Peter Lonard and South Africa’s James Kingston in a three-way tie for second and two shots behind Price.

Campbell gave little indication of good form coming into the event having failed to make the cut in any Seniors event this season.

“It was nice to be out there in the arena competing again,” said Campbell in a video posted on Instagram.

“To my coach Jonathan Yarwood, I can’t thank you enough for what you have done for me over the last six months, it’s been incredible.”

Australia’s David McKenzie, who had lead the event coming into the final day, signed for an even par 72 and had to settle for a share of 5th place again this week following his efforts at last week’s Senior Open.

Peter Fowler closed in equal 6th place following a third round 64, which put him well in contention at third place overnight, however “Chook” wasn’t able to get his round going after carding a 71. A double-bogey at the par-4 third hole proving very costly in the wrap up.

Peter O’Malley was the last of the Aussies in 26th place.