New Zealander Michael Long has secured the Western Australian PGA Championship after equalling the course record at Kalgoorlie Golf Course, for a one stroke victory over Brody Martin.

Starting the final day five shots behind the third round leader Martin, Long closed with an impressive 8-under-par 64 which included 10 birdies to claim his fifth title on the Australasian Tour and eighth professional victory.

“I woke up this morning thinking that if I got it to 15-under, I was just dreaming, but that would probably be enough. It would mean that Brody would have to shoot 68 to tie me,” said Long.

“But I really didn’t go out there with the intention of shooting a 64 let alone a 63. I just wanted to have a nice round.”

Opening with three birdies, Long set the stage for a low-scoring round which he was able to build upon coming home with a 4-under bogey-free closing back nine. 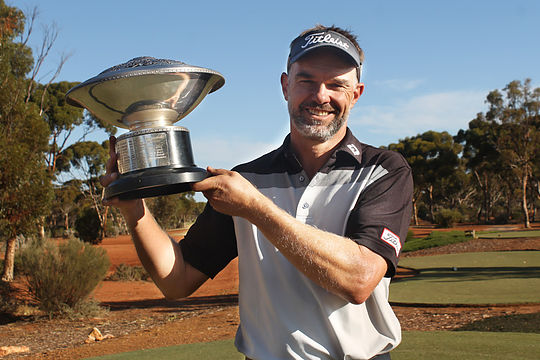 “It was just going straight at the pin, I would aim five feet left or right of the pin and it would go there or I would just pull it onto the pin. It just seemed to have perfect distance control,” added Long.

“The putting was good, it just seemed that whenever I had a 10 footer I holed it, I was just putting a really good stroke on it. I didn’t miss too many out there, you can’t when you have 10 birdies.”

In the clubhouse at 14-under 274, the 49-year-old New Zealander, who calls Perth home, had a nervous wait to see if 23-year-old Brody Martin could birdie his final hole to force a playoff.

“I have never had to do that before, I have always been in the second last group, never been five groups finished and waiting for a result,” added Long, who joined the PGA TV commentary team to occupy himself and even had time to give some golf tips while he waited.

When Martin was unable to make his much-needed birdie on the last to force a play-off, Long had claimed the victory.

“To win this title twice is pretty special, it’s the first time I have ever won a tournament twice so it is pretty neat,” added Long, who won the title in 2008 when it was played at The Cut.

It’s an important win for Long, a former Nationwide Tour and European Tour player, who is now fully exempt on the Australasian Tour until the end of the 2019 season.

While Martin finished runner-up on 13-under the card, his final round playing partner and reigning Victorian Open Champion, Simon Hawkes, finished third on 12-under the card.

Two shots further back was Jake Higginbottom, while Cameron John and Jarryd Felton rounded out the top-5 on 9-under the card.

Long moves to 33rd on the ISPS PGA Tour of Australasia Order of Merit.

The ISPS HANDA PGA Tour of Australasia now takes a break until the Fiji International presented by Fiji Airways is played from 2-5 August at Natadola Bay Championship Golf Course.