American Adam Long (Titleist Pro V1) birdied the final hole to capture his maiden PGA Tour title with a one-shot win at the Desert Classic in California. Three shots off the lead overnight, the 31-year-old, in only his sixth tour event, carded a bogey-free seven-under-par 65 to finish on 26 under, a stroke ahead of veteran Phil Mickelson.

Mickelson had led the event since shooting a career best 12-under 60 on the opening day and was two shots ahead going into the final round, but he missed some short putts in his 69 to tie for second with Canada’s Adam Hadwin.

“I had nothing to lose. In some ways it’s been a little bit of a roller-coaster, but it’s been a steady improvement throughout my career. I’ve played in pretty much most tours around the world that there are and just kind of steadily progressed. It kind of can seem like it came out of nowhere, but my game’s been trending in the right direction for really the last two years now.” 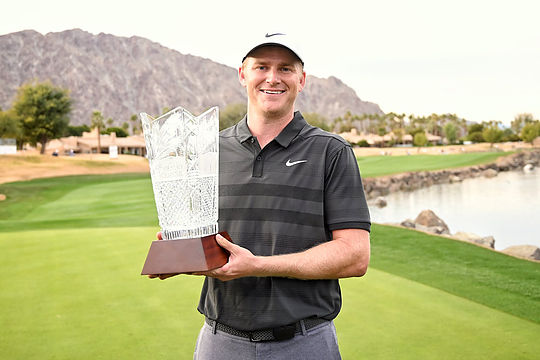 Until the Desert Classic, Long was ranked 205th in the FedEx Cup standings, had four missed cuts and a best of tied 63rd in his first five PGA Tour starts, and hadn’t put together a win since claiming the Woodcreek Classic on the now-defunct Hooters Tour.

In Long’s four previous starts this season on the PGA Tour he made money just once finishing T63 at the Safeway Open and banking US$13,568. His paycheck on Sunday was just a little over US$1.062 million.

Any wonder Long was ecstatic when his long 8-metre putt dropped on the final hole to pip Mickelson.

Yet Long had set out his intentions early with two birdies on the first two holes as he reached the turn on three under. Two further birdies on the 14th and 15th pushed Long into contention but the putt on the 18th sealing the deal.

Long opened with a 63 on PGA West’s Nicklaus Tournament Course, shot 71 on Friday at the Stadium layout and had another 63 on Saturday at La Quinta to get into the final group with Mickelson and Hadwin.

Talor Gooch carded the best score of the day with a 64 bringing him up three places to finish fourth.

Aaron Baddeley was the best of the Aussies firing a final day 65 to jump 40 spots up the leaderboard to finish in a tie for 18th position.

Cameron Davis secured a top-30 result finishing at 15-under-par for a share of 28th position, whilst Curtis Luck dropped 24 places with a final round 75 to share 70th position.