Long pips Senior at the post for PGA victory

It’s the worst way to lose, yet he could still afford a wry smile. 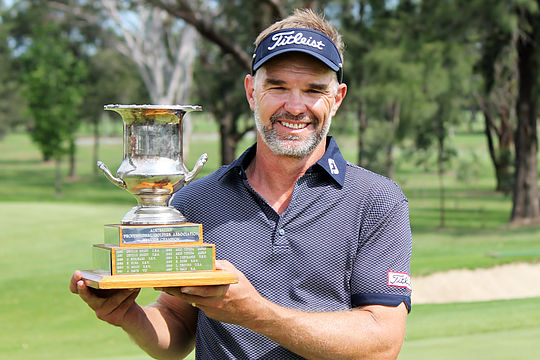 Amazingly, it was the second successive week where Senior had been nutted by just a shot in one of our major ‘seniors’ events by the same man.

And Long, a virtual seniors tour rookie, has won at his only two starts on the Ladbrokes Legends Tour, which certainly wouldn’t make Senior feel any better.

“I am honoured to win the Australian PGA Seniors title, it’s pretty neat to win your association’s national title,” said Long, who has lived in Perth for some years.

Long shot rounds of 65-65-68 to finish the Richmond event in Sydney’s north-west at 12-under-par after his incredible birdie on the 72nd hole.

It put him a mere one shot to the good of Senior as Long won in successive weeks for the first time in his career.

“Everyone is competitive out here,” said Long.

“I was a bit nervous with Peter chasing me but that’s what it’s all about.”

“Competing against legends like Peter Senior is a dream, I actually can’t think of too many things better than that.”

Long now plans to head for the US to try his luck at their Champions Tour Qualifying School as he attempts to obtain a card for the 2019 season.

US Champion Tour regular David McKenzie finished outright third on eight-under the card with Mike Harwood rounding out the top four on seven-under.

After attracting good crowds to their event, Richmond has signed on to host the Australian PGA Seniors Championship again in 2019 with the PGA of Australia and the Richmond Club committed to ensuring the tournament has a regular home in the ensuing years.