Mexico’s Gaby Lopez claimed her third LPGA Tour title on Sunday coming from four strokes behind to win the Dana Open after closing with a 63.

Lopez finished at 18-under overall and a one stroke win over American Megan Khang, with Germany’s Caroline Masson in outright third at 16-under-par. 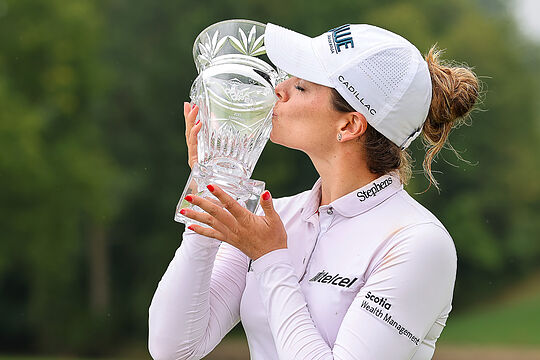 It was a tight finish that came down the last hole with Lopez needing to make birdie on the last.

“I knew I had to make it. So I told myself, well, I’m just going to try to roll it through here. If it rolls through this spot, it has a great chance. And so I tried to be calm all day long, but sometimes excitement gets me and I couldn’t hold it for the last putt.”

Lopez, 28, joined the LPGA Tour in 2016 after finishing in a tie for 10th at qualifying school. In November 2018, she won her first LPGA Tour event at the Blue Bay LPGA with her second title coming in 2020 at the Diamond Resorts Tournament of Champions.

As an amateur she played out of the University of Arkansas where she won three events and was individual runner-up at the 2015 NCAA Division I Championship.

Hannah Green finished the best of the Australians in a share of 10th position at 13-under-par. Steph Kyriacou was the next best Aussie on a tie for 45th position, followed by Minjee Lee in 49th.