Lowry led from start-to-finish to secure a fourth European Tour victory in birding the final hole in a closing round of 71 in windy conditions and win by a stroke at 18-under par from South African Richard Sterne (69).

Lowry’s victory, his first since the 2015 WGC – Bridgestone Invitational, will see the 31-year old jump from 75th on the World Rankings and into possibly 40th and with the very likely assurance of returning to Augusta National in April.

Harrington wasted little time tweeting his pleasure for Lowry saying: “Brilliant by Shane, a win in the toughest possible way pillar to post. Back where ne needs to be.” 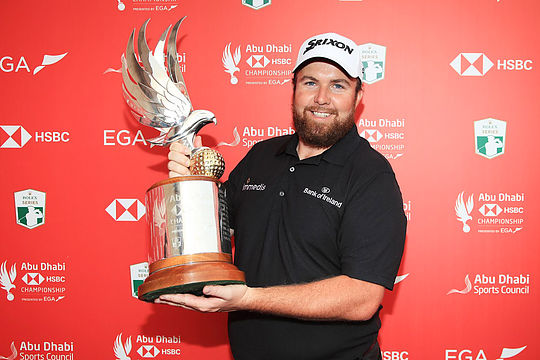 Lowry went into the final day leading by one but found himself four shots behind Sterne who went out in 31 but opened the door for Lowry with bogeys at 14 and 16.

Lowry played his outward nine in one-over thanks to just two birdies but also three bogeys and then dropped another shot at 11 before remarably birdieing the tricky par-3 12th hole for a fourth day running.

He then birdied 13 and when Sterne bogeyed the par-4 16th the duo found themselves heading down the last tied for the lead on 17-under only for Sterne to play a poor second shot and then for Lowry to two-putt for birdie.

Lowry returned to Abu Dhabi for the first occasion in five years after the bitter disappointment last August of losing his PGA Tour card. He spent close to a fortnight working on his game in nearby Dubai and the hard work paid off with the Irishman firing an equal course record 62.

“It’s been probably three-and-a-half years since my last win so to come out at the start of the year, I knew I had been playing all right in the last couple of weeks in my preseason that I was doing,” he said.

“But then it was an emotional roller coaster today. I obviously went out with the lead by a few and before I knew it I was four behind.”

“I didn’t really envisage this to be honest a 62 on Wednesday and in the first round and kick on from there and just play good golf for the rest of the week.”

“I’m just over the moon to have won again, and you don’t know, like, you look at — I think you look at Westy and Danny Willett at the back end of last season and you see what they did and they came back — like you don’t know when you’re going to win again. It’s so hard to win out here.”

In also becoming the first Irishman to lift the gleaming falcon trophy, Lowry set a new Tour record thanks to 11 ‘2s’ on his four-round scorecard.

As well, the win takes Lowry to the top of the Race to Dubai standings.

The victory also buries any lingering demons after the bearded Irishman had led going into the final round of the 2016 U.S. Open at Oakmont.

“I slept okay last night, but it was a little bit nervy this morning, breakfast and lunch didn’t go down as well as it has been the last few days,” added Lowry.

“But the one thing I got from Oakmont is I laid down and I didn’t show any fight or bottle there and I did that today. So that’s kind of — I felt after the 11th hole, I was getting myself in the same situation that I got myself in Oakmont and I genuinely thought that.”

“I also had a quick word with myself and told myself that, you know, just kick on now and just see what I can do for the next seven — six or seven holes.”

And spare a thought for Rory McIlroy as McIlroy has been runner-up in Abu Dhabi on no fewer than five occasions and in the year he chooses not to contest the tournament another Irishman in Lowry steps-up to accept victory.

Jason Scrivener continued his run of good form on the European Tour last season finishing in a tie for 16th on 9-under. Scott Hend was next best of the Aussies on 7-under with Sam Brazel (T45) and Lucas Hebert (T54) rounding out the field that made it through to the weekend.

Min Woo Lee missed the cut in his first outing as a pro following rounds of 72 and 73.