Ireland’s Shane Lowry captured his first title in the US with a two-shot win in the WGC-Bridgestone Invitational at the Firestone Country Club in Ohio.

The world number 48 had began the final day in third, two shots behind co-leaders Justin Rose and Jim Furyk. Lowry carded four birdies in a 66 to finish on 11-under, two ahead of Bubba Watson with England’s Justin Rose and American Jim Furyk in a tie for 3rd position at 7-under.

Lowry earned US$1.57 million, along with a PGA Tour card for the next three years. He had been a special temporary member.

Lowry, 28, who won the Irish Open as an amateur in 2009 and is a former winner on the European Tour now has the luxury of co-ordinating a playing schedule on both tours.

“It’s hard to believe but I played good and hit the ball well,” said Lowry. “I was nervous but made a lot of good decisions and had a bit of luck as well. It’s great for me and everyone who has supported me over the years.” 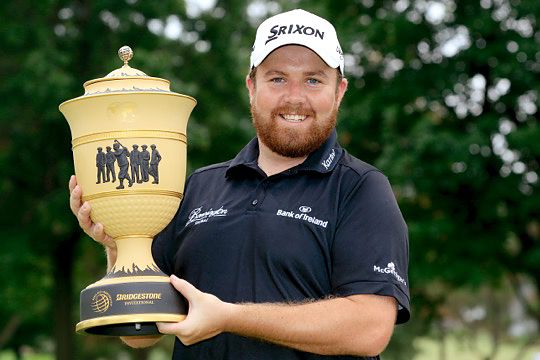 Lowry became the first non-PGA Tour member to win a World Golf Championship since Martin Kaymer at the 2011 HSBC Champions and moves to No. 19 in the world. Lowry plans to play both tours next year.

Masters and US Open champion Jordan Spieth closed with a 66 and tied for 10th, his fifth straight top-10 during a stretch in which he has won four times.

A win this week at the PGA Championship, starting Thursday at Whistling Straits, or anywhere over the closing seven weeks of the PGA Tour season would be five victories in 2015 for Spieth, making him the first player other than Tiger Woods to win that many since Vijay Singh won nine in 2004.

Should Spieth win the PGA Championship he will join Woods and Ben Hogan as the only players to win three majors in the same year. Spieth is also eyeing off the world number one ranking from Rory McIIroy.

McIlroy was completing his second practice round in as many days today at Whistling Straits and has indicated that his attendance at the last major for the year has transformed from “almost certain” to “almost, almost certain”.

New Zealand’s Danny Lee had another stellar tournament securing a tie for 6th finishing at 5-under.

Jason Day and Steven Bowditch finished the best of the Aussies in Akron in a tie for 12th position at 3-under, Bowditch dropping eight places from his third round 63 with a final round 2-over 72.

Marc Leishman finished in a tie for 33rd position at 2-under, Adam Scott dropped 12 spots with a closing round of 3-over-par 73 to finish at 5-over and in a share of 45th position.

Andrew Dodt and Nick Cullen rounded out the Australian contingent with Dodt finishing in a tie for 63rd position and Cullen in a tie for 75th.