Lowry leads, Day back in contention at Oakmont

Jason Day has himself played into US Open contention after shooting a third round 4- under 66 at Oakmont today.

The World No. 1 sits at 1-over and in a tie for 8th position, six strokes behind current leader Shane Lowry who has yet to finish his third round when play was suspended at 8.49pm due to darkness. 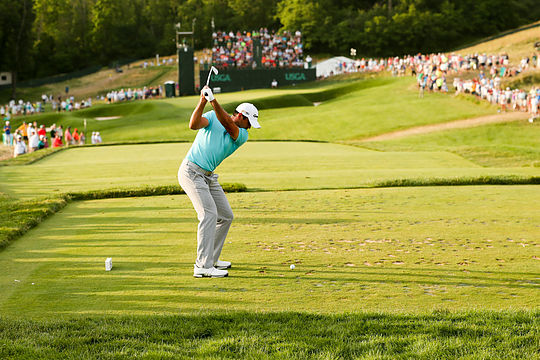 Heavy rain on the first day has wreaked havoc with the schedule all weekend long, but Lowry has maintained his focus throughout.

He shot a first-round 68, then a second-round 70 before moving into the lead as darkness fell on day three with a five under par score through 14 holes.

“Shooting 69 in the second round and then 66 today. Shoot anything under par here, you’re definitely moving up a lot.”

“The first round kind of killed me here. But hopefully, I give myself an opportunity tomorrow.”

“I just wanted to play hard and fast for it and I think the harder the better, like a normal U.S. Open Sunday should be.”

“I think it would be fun for everyone. Even though it is hard and stressful, I just enjoy those times.”

Unheralded American Andrew Landry is in second position two behind Lowry at 3-under, with Lee Westwood, Dustin Johnson and Sergio Garcia sharing 3rd position at 2-under.

Rory McIlroy double-bogeyed the final hole to card a one-over par 71 to miss the cut by two shots on 8-over after an opening round of 77, the first time the four-time major winner has not made the weekend in a major since the 2013 British Open at Muirfield.

Defending champion Jordan Spieth is 4-over par after a second-round 72 while Masters champion Danny Willett is a further shot back after a level-par 70 in his second round.

Adam Scott is the next best Aussie at 2-over and in a tie for 12th position and has yet to finish his third round. Cameron Smith is at 5-over through 16, with Marc Leishman at 7-over.

The third round will conclude early on Sunday morning, then the course will be reset for final round action.