Shane Lowry has expressed his disgust at what he described as the ‘dog’s’ abuse directed at his wife and father by beer-fuelled U.S. fans during last week’s Ryder Cup.

The proud Irishman is highly-critical of a minority of fans in singling out his wife, Wendy and father, Brendan as they walked the Whistling Straits course supporting Lowry. 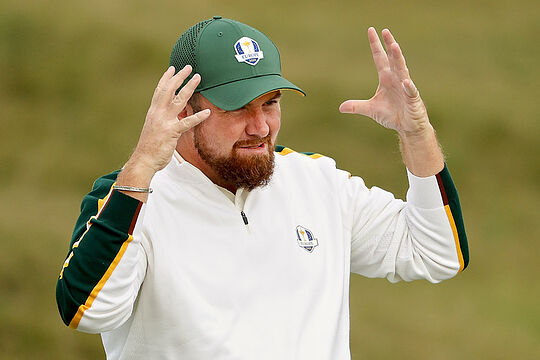 Lowry, who was making his European Team debut, revealed he had been warned to expect comments and not to antagonise anyone by answering back but that doesn’t ease his disgust in learning from both his wife and father the level of abuse they received.

Lowry said: “I didn’t think it was that bad until I asked my wife what it was like for her, and they got dog’s abuse coming around as well.”

“It’s just not very nice is it, and it’s not nice for them to have to listen to this. But that’s a small percentage of the crowd.”

“The majority of the crowd were fine as I finished my match on 16 on Sunday and I was walking back down to and follow the other groups and I got a huge ovation off the crowd and in the grandstand on 16, that was pretty cool.”

“And I thought I get on well with the crowd last week as best I could but it was a home crowd and it was always going to be a partisan crowd.”

“But some of the stuff was not very nice. That’s just the way it is. Some people are idiots, especially when they drink. Nobody turns into a genius drinking, and that’s what they were doing last week. Especially if you were out in the afternoon matches, it was loud.”

“It was hard for us. As a team it was hard for us to perform our best because, you know, no matter what you say, you stand up and you hit a 3-iron into ten feet from 250 yards and you don’t even get a ripple of applause. You almost get booed for it. It’s hard.”

Five years ago at the 2016 Ryder Cup at Hazeltine Danny Willett’s parents were also singled out for abuse while it had also been the norm for so many years when Scotland’s Colin Montgomerie competed in any U.S. event.

For Lowry, he’s already fearing what it will be like in four-years time when the 45th Ryder Cup is hosted at Bethpage Park; the Long Island course in New York is sure to be jam-packed with the toughest crowds on the planet.

Lowry said: “Bethpage Park in 2025 is going to be horrendous.”

“But it will be a great chance to shut them up. That’s the way I see it. When I’m out there that’s what I’m doing. There is nothing better than holing a 20-footer and turning around to see them all standing there dead silent. It’s amazing.”