LPGA to co-sanction Women’s Open in 2012

The 2012 ISPS Handa Women’s Australian Open will take place the week of Feb. 6-12 at Royal Melbourne Golf Club, host of the upcoming 2011 Presidents Cup, beginning a three-week LPGA swing through the Asia-Pacific region that will include stops at the Honda LPGA Thailand and the HSBC Women’s Champions in Singapore. 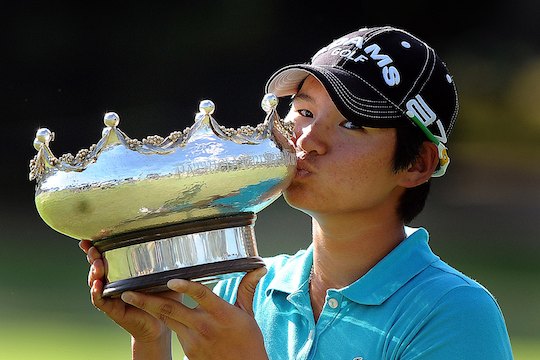 “All credit goes to Golf Australia for their consistent vision to bring the LPGA Tour to Australia,” said LPGA Commissioner Michael Whan.

“The combination of spectacular city, top-notch venue, and terrific fans make this event a perfect start to our global spring swing.

The ISPS Handa Women’s Australian Open works perfectly for our 2012 LPGA Tour schedule as Australia will lead right into the Honda LPGA Thailand and HSBC Women’s Champions in Singapore.”

The 2012 ISPS Handa Women’s Australian Open will be a full field event with players battling for a US$1.1 million purse in a four-day, 72-hole stroke-play competition that will be televised in the U.S. by Golf Channel and in Australia by ABC. In 2013, the event will be hosted by Royal Canberra Golf Club.

“There will be greater international media exposure for Australia’s premier sporting events city. The Open will be broadcast into more than 240 million households in 171 countries, exposing our fantastic events and sporting city to thousands of potential tourists and golf fans.”

Considered the most prestigious golf club in Australia, Royal Melbourne Golf Club is the oldest club in continuous use on the continent dating back to 1891.

Royal Melbourne has played host to numerous world class golf events including the Canada Cup, World Cup, Australian Opens, Heineken Classics and two Presidents Cup events including the 1998 edition – the first to be played outside the United States – and the upcoming 2011 edition.

“Australia is one of my favourite places in the world,” said Rolex Women’s World Golf Rankings No. 1 Yani Tseng. “I won the Australian Open last year and the attendance was great. I’m really excited to go back and defend my title as an LPGA Tournament. I think everyone from LPGA is very excited for it.”

“This is a very exciting time in Australian golf and a year of firsts for the championship. We’re looking forward to working with the LPGA on a world-class event on Royal Melbourne’s composite course for the first time,” Pitt added.

The 2012 ISPS Handa Women’s Australian Open marks the sixth time the LPGA Tour has played an official event in Australia dating back to 1991.

From 1997-2000, the Australian Ladies Masters was co-sanctioned by the LPGA, with LPGA and World Golf Halls of Fame member and Queensland native Karrie Webb winning in 1998, 1999 and 2000.

The LPGA most recently co-sanctioned the Lexus Cup, an unofficial team competition, in 2007 where Team Asia defeated Team International at The Vines Resort and Country Club in Perth.

“I’m very excited about the announcement of the LPGA returning to Australia with the co-sanctioning of the 2012 ISPS Handa Women’s Australian Open,” said LPGA and World Golf Halls of Fame member and Australian Karrie Webb.

“Golf Australia has been very committed to the Women’s Australian Open by showcasing the tournament on some of the greatest of Melbourne’s Sandbelt courses. This year, the LPGA will be treated to one of the best venues not only in Australia but in the world at the famous Royal Melbourne Golf Club.”

“As an Australian, I’m very happy to see the LPGA playing back in my home country and I know the Melbourne sport fans will support the event in the true fanatical way they always do.”

As Chairman of ISPS, Mr Haruhisa Handa expressed his excitement about the ISPS Handa Women’s Australian Open partnering with the LPGA.

“It is a great opportunity to promote the great game of golf as the best players in the world compete on the iconic Royal Melbourne Golf Course, for the first time ever,” Mr Handa said.

Mr Handa said he was delighted that the ISPS Handa Women’s Australian Open continues to grow in importance on the world stage and highlights his support of golf around the world. A priority in his focus is the support for Blind and Disabled golf to be included in the 2016 Paralympics.