Curtis Luck may have been competing in his first Australian Open but that seemed not to phase the reigning US Amateur Champion as he fired a 5-under 67 to share the lead with Victoria’s Lucas Herbert.

Ryan Fox, local St Michael’s member Benjamin Clementson, Adam Burnett, David Klein and veteran Peter O’Malley are a shot back at 4-under following the opening round of the Australian Open at the Royal Sydney Golf Club.

The 2014 Australian Open champion and main draw card Jordan Spieth was solid as he put together a round of 3-under 69, and remains in the mix in a tie for 8th.

Luck won the US amateur this year as well as the Asia-Pacific Amateur and has been in sensational form of late. All indications are that he will turn professional after he takes up his invitation to play in the Masters at Augusta National in April. 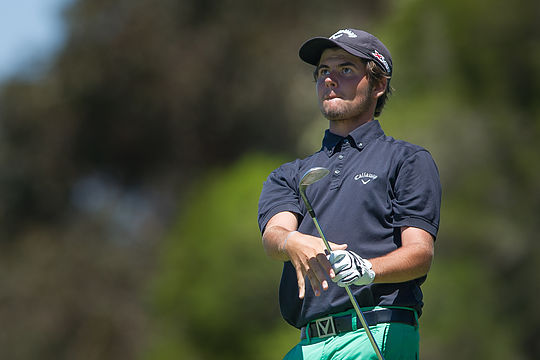 “This is still pretty new to me, playing in Aussie Open style of events. I had a pretty big crowd in the US,” said Luck.

“This is all good preparation for my next year of golf. I haven’t had the chance to play too many events on this scale. So obviously get my head around the course, hit some good golf shots over the week and see what it is like to play with some crowds.”

The 20-year-old West Australian, the second-ranked amateur in the world, became only the third Australian to win the US Amateur and undoubtedly has a pathway to the professional ranks awaiting.

But keep an eye out for Herbert who is due for a win on the big stage after a period of absence from a stellar amateur career.

His leading amateur finish at the 2014 Australian Open came after a similar result at the Masters at Huntingdale, while in the same year Herbert was the individual runner-up at the world amateur team championship and second at the world junior championship.

Herbert is hungry and ready to make a point yet it is only early days and despite all the media hype about the Aussie ‘young guns’ and the ease of attraction with pumping up our recent amateur success on the world stage to generate public interest – experience ultimately counts in professional sports.

With three rounds to play and the likes of former champions Greg Chalmers, Jordan Spieth, Geoff Ogilvy and Peter Lonard all within contention, it would be premature to elevate the young guns to the lofty heights of claiming our national title and to say it is in their hands already. This is professional sport after all, not a weekend battle for some silverware.

Adam Scott, also a former winner of this title, drew a big gallery for his afternoon tee-off but failed to fire for most of the day. A late birdie on the 17th helped a little but the 2013 champion had to settle with a round of 1-over for a share of 69th position and is in need of a stellar round tomorrow to make the weekend.