Curtis Luck has lived to fight another day as he tees up tomorrow morning in Atlanta with seventeen other hopefuls for four spots to make the top-64 and match play segment at the US Amateur Championship being played at the Atlanta Athletic Club.

Luck fired rounds of 73-72 to fall right on the top-61 and ties number for qualification after sinking a 10 metre birdie on the last hole of qualification. 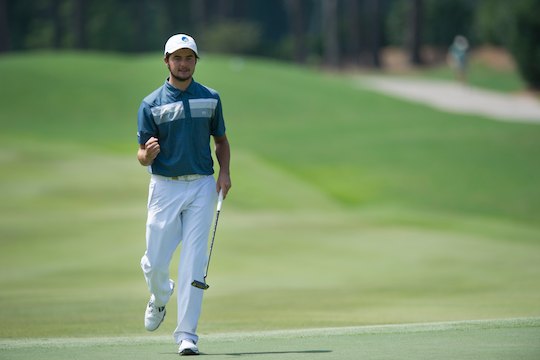 The cut came right on 2-over-par forcing Luck to wait over 4 nervous holes to determined whether he would tee it up tomorrow.

“I don’t know if it was enough but if it is, I’m right in there tomorrow,” said Luck following his round.

USGA decided late this afternoon that a playoff for the final spots was imminent and announced that an elimination three hole play-off would determined the top-64.

“If I get a chance, I’ll be in there fighting,” said Luck, a semi-finalist at the US Junior last month.

“It becomes a whole new tournament and if I can get through, I just love matchplay.”

During this US Amateur it was our young guns who showed the promise.

Keeping in mind of the seven Aussies competing this week in Atlanta, three are first timers. Each one is the future of Australian golf and they’ve gained valuable experience from this event.

Felton, 19, was unlucky not to be in the mix tomorrow, missing the elimination round by a stroke in his first hit out at the US Amateur. As was Herbert who also finished one from the mark.

Ryan Ruffles at just 16 and with the weight of expectation on his shoulders was just unlucky. Finishing two off the pace after being within sniffing distance of qualifying, this will be the first of many US Amateurs for this talented young gun.

Taylor MacDonald started brilliantly with an opening 68 and look certain to qualify, yet a second round 79 shattered his chances.

Todd Sinnott fired rounds of 75-77 to be well outside the zone, as well as Kade McBride after rounds of 79-74.

Unlike last year where two Aussies, Oliver Goss and Brady Watt, kept our flag flying in the tournament, this year our players have been subjected to the brutal attrition of world-class competitive golf.

This is the US Amateur, aside from the British and Western Amateur, no other events compare. Greens are quick, the fairways hard, holing putts comes at a premium. This US Amateur from an Australian perspective was a “work in progress”.

Luck, Felton, Herbett and Ruffles will return and in future US Amateur events make their mark.

From Luck’s perspective, he’s already made his mark in the US.

Despite Ryan Ruffles being a confirmed starter, Golf Australia is one of the major amateur associations yet to name its Eisenhower Team for the World Amateur Team, which starts 3rd September in Japan.

As more experienced exponents such at Sinnott and McDonald have fallen this week and with Geoff Drakeford back in Australia and contemplating European Tour School, should Luck progress at the US Amateur, it will certainly make the selection process interesting.