Curtis Luck thought when he stood on the opening tee of the Riverside Course at Atlanta’s Athletic Club’s, a 563 metre par 5, that he would probably need a birdie to survive the 17 man play-off for four positions in the US Amateur Championship proper.

Luck was the last Aussie standing with rounds of 73-72 to fall right on the top-61 and ties for the play-off. 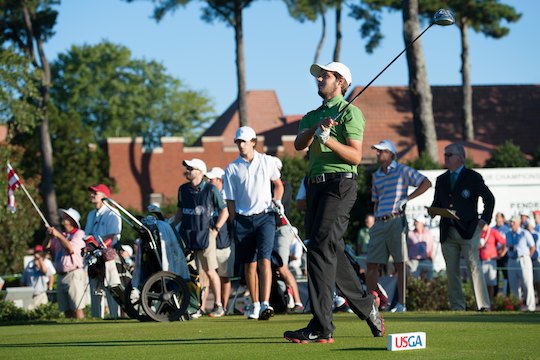 Curtis Luck tees off the first playoff hole during the morning’s qualification round at the US Amateur (Credit: Anthony Powter)

After pushing his opening drive right to the opposite fairway, Luck executed an exquisite recovery shot to be 90 metres from the green.

Luck’s approach then landed two metres slightly above the hole and on the right tier to create a birdie opportunity. After Canada’s Garrett Rank chipped his third to a foot for a certain birdie, the standard had been set and anything less than birdie risked not progressing.

It is often said that golf is a game of margins, a missed putt there or a bad bounce just short of the green can mean the difference between winning, or in this case qualifying, for a major amateur event.

As Luck rolled his birdie putt the subtle breaks on Atlanta Athletic Club’s greens took their course, his ball edging the lip and slipping a foot by, and with that Luck’s chances of making the desired 64 for match play.

Luck missed progressing by the narrowest of margins, yet it was still a great tournament for the 18-year-old.

Six of the seventeen players birdied the first play-off hole, by the second, a 173 metre par 3, the four qualifiers had been determined with pars.

Keeping in mind that Luck has just recently moved from the junior to the main amateur ranks, his efforts in Atlanta were commendable.

Firstly, Luck did not have automatic status to play the US Amateur because of his world amateur ranking and made it to this week’s field by taking medallist honours at sectional qualification in Las Vegas.

To then make the playoff in his first attempt at this major amateur event represents another step in Luck’s development and confirms his standing as one of our emerging young guns moving into the amateur ranks.

“I came here [Atlanta] not expecting much,” said Luck, a semi-finalist in last month’s US Junior Champinship in Texas.

“To make the play-off is an awesome experience. I almost got there but I’ve got a few more years in these events to come back and do it. Overall, this has been a fantastic experience for me. It’s taught me about course management and the importance of making each and every putt out there.”

Luck’s opening round of 73 was in his words ‘a round of missed opportunities’.

“I had a few three putts on Monday and that ultimately hurt me,” said Luck.

“The American players putt so well and playing these courses has been a huge eye opener for me.”

“You’re dealing with softer fairways and you need to hit your shots with a lot higher trajectory with your irons. It’s been different for sure to the golf we play back home.”

Luck heads back to Australia on Sunday with his next event the Asia-Pacific Amateur starting September 3 at Royal Melbourne.