Luck, who has already earned berths in the Masters Tournament, U.S. Open and The 146th Open at Royal Birkdale next year after winning the U.S. Amateur in August, carded a bogey-free 67 to finish on 12-under-par (276). 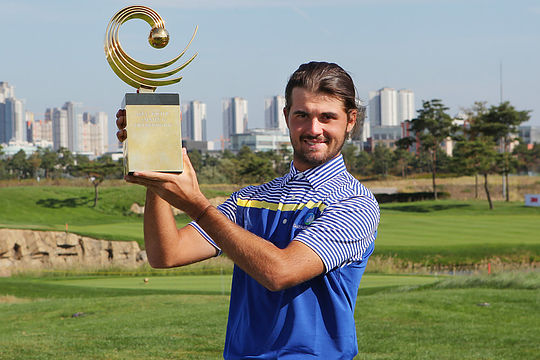 As runner-up, Coletta (75) earned a place in The Open Qualifying Series.

Luck, 20, was seven behind Coletta at the start of the final day and had to shoot his lowest score of the week to clinch the Championship in his second appearance, having made his debut in 2014.

“I’ve had an amazing year and this has topped it off,” said Luck who was part of the Australia team that won the World Amateur Team Championships in Mexico two weeks ago.

“I came here to try my best and win, but I wasn’t expecting to be standing here with the trophy at the end of the week. I’ve had a pretty good year and a couple of big wins in the past couple of months.”

Playing in the penultimate group, Luck birdied Nos. 2, 11, 12 and 15 and was playing the par-five 18th when he realised Coletta had drawn level with him following a chip-in birdie on 17. Luck had hit his second shot into a bunker, but splashed out to 15 feet and drained a curling putt, following it up with an emotional fist pump.

“It was a pretty nerve-racking finish as I knew Brett could make birdie on 18, so fortunately for me he didn’t,” said Luck.

“That bunker shot was probably one of the most nervous shots I’ve ever had to play, and the putt just topped it off. I left myself a bit of a swinging putt, but I had a really good feel for it.”

Luck conceded that he felt for Coletta, who led after rounds two and three. “Brett’s a really close friend of mine and I understand the opportunity he has just missed out on. I do feel a little guilty and sad, but I’m so competitive I couldn’t give up the chance to win an event like this.”

Coletta, 20, started the day at 14-under, but a birdie at three was followed by back-to-back bogeys then double bogeys at nine and 11. He bounced back with birdies at 14 and 17 but was unable to convert a birdie putt on the last and force a playoff.

“A chip-in on 17 helped and I knew I had to make a birdie at 18, but I had a poor second shot. My chip wasn’t too much better, but that’s golf for you.

“I’m going to look back at the first three rounds and leading this prestigious event. I’ll go back and catch up with family who will be so proud of me. They were just hoping to see me once on TV, never mind seeing me lead after the second and third rounds.”