It might have been a massive fluke – but at the end of the day it’s the reason we all like to have a ‘flutter’ on the golf each week.

And if you walk away with almost 90 grand from a $50 bet just once in your life, well, it’s all worthwhile. 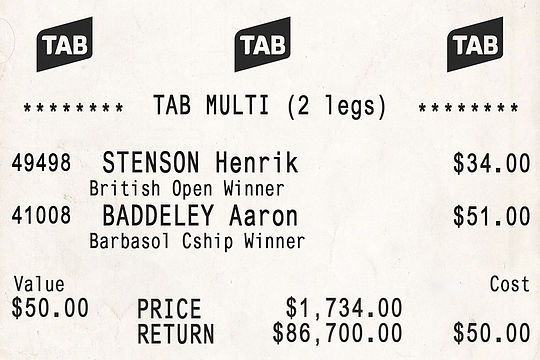 And if ever you do bump into Henrik Stenson or Aaron Baddeley in a bar you’d probably want to send them over a bottle of the finest French champagne.

Because one punter had the dream result of a lifetime when Stenson won the British Open and Baddeley took out the Barbasol Championship the same weekend in the US.

Our intrepid punter had $50 on the double and walked away with a cool $86,700 for his trouble.

It took some incredible courage just to place the bet…or knowledge of professional golfer’s games that the rest of us can only envy.

After all, Stenson had never won a major championship – and as for ‘Badds’, he hadn’t been on the winner’s dais for five years, so it was a heck of a gamble to expect him to be there again – even with all the best players in the world seemingly absent at the Open at Royal Troon.

Even Stenson’s form could be described as “patchy” at best…he had missed three consecutive cuts on the PGA Tour.

And at age 35 it was probably fair to suggest Baddeley’s best form was behind him as well.

You can also bet our punter was on the edge of his seat as Stenson battled with Mickelson down the stretch, holing putts from everywhere while Baddeley then had to hold off Si Woo Kim in a playoff that took four holes at the Barbasol Championships.

Wonder if he “laid off” with a few side bets on the others?