Dutchman Joost Luiten made amends for missing out on Ryder Cup selection shooting a final round 71 to capture the Wales Open at Celtic Manor.

Luiten bounced back from two straight bogeys in commencing his round to finish one shot clear of his rivals with a level par 71 for 14 under par victory tally. 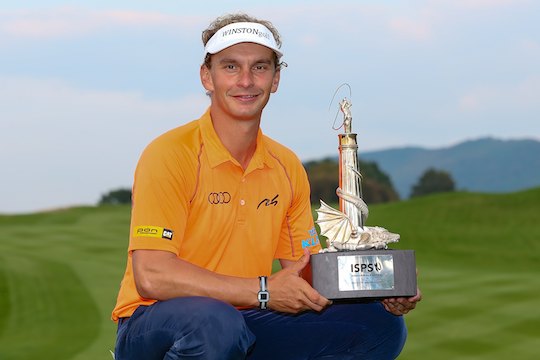 It is the 28-year-old’s third Tour success and comes after being overlooked as a Gleneagles ‘wildcard’ pick in favour of eight-time Ryder Cup star Lee Westwood who finished one place behind Luiten in 16th on the European Team qualifying points table.

“I knew when the qualification ended I needed to play better so luckily I’m in good form now,” said Luiten.

“I just wish the team all the best and hopefully they can win.”

The pair of Ireland’s Shane Lowry (70) and England’s Tommy Fleetwood (67) shared second place on 13-under par.

European Tour debutant Nathan Holman finished the best of the small Aussie contingent in equal 17th place following a final round 6-under 65 to collect €28,138 (AUD$40,500) – the biggest cheque of his career.

In contrast, Westwood struggled over the final day to be five over after nine holes and then seven over through 14 holes prior to birding two of his closing three holes in a five over par 76 and plummet to a share of 60th place at two over par.

“I needed to play some competitive golf and I’ve done that,” he said.

“I hit a few good shots this week, not so good today, but I probably had one eye on next week. I don’t think the concentration and the focus was there.

“The Ryder Cup is very special, I am looking forward to getting there tonight and preparing for Friday when it starts.”

Bjorn heads to third Ryder Cup, and his first in 12 years, pleased with his mental outlook despite a last day 74 and one fewer than Westwood at one over par.

“It’s been a strange week and I didn’t play particularly well early on but played pretty well on the weekend but didn’t score that well with my putter letting me down,” said Bjorn.

“But if that’s all I have to work on then that’s pretty good for my concentration levels going into the Ryder Cup.

“As well, my mind this week has been on Gleneagles so while my scoring was awful, the game is in pretty good shape and besides we now go to match-play and that’s a different format.

“I said I would use these three weeks to work on game and get myself ready for the Ryder Cup and it’s certainly taken a dramatic turn for the better this week.”