Dutchman Joost Luiten ended a decade-long home victory drought in capturing the KLM Open in a play-off at Zandvoort.

Luiten, 27, also captured a third Tour victory and his second this season after both he and Spaniard Miguel Angel Jimenez ended regulation play tied on 12-under par in the bright but windy conditions. 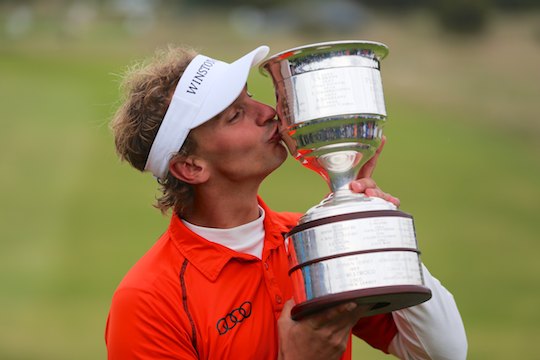 Luiten then two-putted for par the first extra hole to deny Jimenez a second KLM Open title victory and 19 years after his first, and with the Spaniard’s par putt seconds earlier lipping out.

It is the first time in the 41-year history of the European Tour a Dutch-born player has won two events in a single season and also only the second Dutch-born golfer to win the KLM Open in a similar period.

And sponsors KLM celebrated Luiten’s success with a fly past of a 1940s DC 3 aircraft.

“Winning your own national Open for any player is like winning a Major and this is how this win feels,” said Luiten

“I went close a few years ago in my but to win now feels just unbelievable and I think it won’t be later tonight when it all sinks in.

“This win will be huge for Dutch golf as it’s been 10 years since Maarten Lafeber won so another Dutch winner will help the game in Holland.

“But all credit to Miguel as he’s a tough competitor as he was playing really, really good with four birdies in his first six holes.

Jimenez was looking to claim a second KLM Open victory 19 years after his first and with the 49-year old also seeking to extend by 292 days his record as the oldest-ever Tour winner.

Luiten earned a first prize cheque for €300,000 that has taken him to top of the Ryder Cup points table.

Robert Allenby, who was playing this event for the first time since 1994, finished in a tie for 11th place on five-under following an impressive 65 in round one.

Marcus Fraser was a shot further back in T16 while Richard Green rounded out the Aussies making the weekend cut in T30.