Holland home-town hero Joost Luiten was in first class all on his lonesome posting a sizzling final round course-record equalling 63 to capture a second KLM Open victory title in four years.

Luiten was rightfully afforded a standing ovation in a round that included 10 birdies and just two bogeys on The Dutch course where he is a member and cruised to win by three shots at 19-under par in glorious sunny conditions. 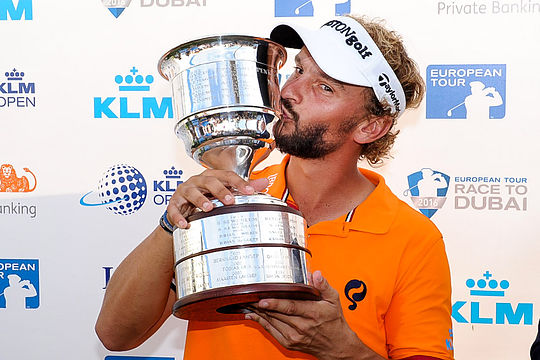 Huge galleries had been following the proud 30-year-old all week in Spijk with Luiten delivering his fifth European Tour victory in a lot less stressful manner than in 2013 when he defeated Spain’s Miguel Angel Jimenez in a play-off at Kennemer.

Luiten is now the first Dutch-born player to win his national Open twice since the tournament became part of the European Tour back in 1972.

Among the first to congratulate Luiten was his girlfriend, Lyan along with his equally proud coach, Phil Allen.

Luiten had began the final day trailing three shots behind Australia’s Scott Hend and gained the start he so desperately needed with birdies over the opening two holes before forging his way towards the front.

It is his first win for almost two years and reward for a brilliantly consistent 2016 so far that saw him come into the week with eight top tens including two runner-up finishes and represent his country at the Olympic Men’s Golf Competition.

“The first one was special but this one is very special,” he said. “To have the Dutch people behind me all week and to be able to stand here with the trophy in my hands is very special.”

“It was one of those days where everything I looked at went in the hole. People talk about the zone, and I think I was in it today. I missed one shot when I went in the water on 13 but besides that I didn’t do much wrong.”

“These are the kind of days that make it all worth getting out of bed for.”

“This makes up for any disappointments this season. I had been so close to winning this year in Spain and China but to win here in front of your home support just makes you forget about all the disappointing results.”

“We will see what happens but I just want to keep this form going and see where it takes me.”

South Korea’s Byeong-hun An was then third at 13 under after matching Austria’s Wiesberger with a 65, a shot ahead of Spaniard Alejandro Cañizares, English duo Ben Evans and David Horsey along with Hend.

Hend still held the lead as he stood on the eighth tee but he found water on the ninth and 15th for a pair of double-bogeys before a bogey-birdie finish saw him sign for a 73.

Marcus Fraser was the only other Australian to make the cut but the Olympian finished a distant T66 at Even par.