Hunter Mahan deserves plenty of praise for his big final round to capture PGA Tour win number six at The Barclays. Wins like that make up for a tough year, mostly off course, which he’s endured.

However, Stuart Appleby and Jason Day’s tie for second with American Cameron Tringale can be viewed in a number of ways. For Appleby it’s huge, almost a vintage performance…while Day will rue another missed opportunity, but will take confidence from being in the mix. 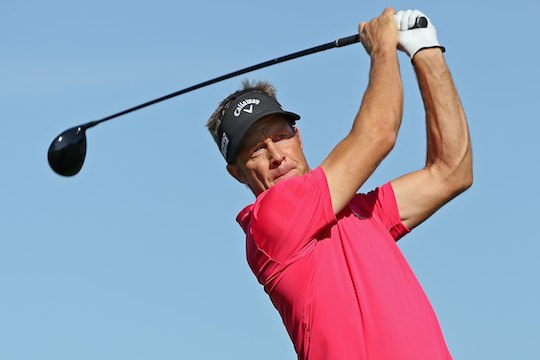 Golf at this level has all sorts of ramifications on the players. Think of Jim Furyk, another 54-hole lead not capitalised on, but he’s constantly contending. You either take the positive or negative side of that discussion.

Appleby, a nine-time PGA Tour winner hasn’t contended in years, so his T2 is massive, especially as it boosts his Playoff chances. Starting the four-tournament finale 98th, he was under pressure to perform or perish…now he’s 19th and fast tracking the Tour Championship.

If he can make it all the way to Atlanta it will ensure the 43-year-old gets a start at every major next year plus all the WGCs and Invitationals. A great outcome for a guy whose bolt from the blue win at The Greenbrier, where he shot 59 to win in 2010, is his only triumph in the US for almost a decade.

This result could help prolong his PGA Tour career another few years, which is a big deal as most pros call the 45-50 age group No Man’s Land on Tour. No longer good enough to play amongst the best, but not yet old enough for the Champions Tour.

Fingers crossed the Victorian is able to build off this great result and take it as far as he can. He’s certainly worked his tail off with long-time coach Steve Bann and deserves good results.

For Day, it’s a different story. His runner up result at Ridgewood was unexpected too, but for the wrong reason. Sharing the lead with Furyk heading into the final round and then holding it outright going into the back nine, he was favoured to win.

In a year that has been hampered by a lot of injuries and illness, the chance to end it on a bright note is at his fingertips. By not closing this opportunity is not the end of the world as the Queenslander has three more events to pick up his second win of the season.

But the reality is, by constantly contending and not winning ensures he gets viewed differently to Rory McIlroy, a player he has to beat if he wants to be world number one. Greats have a habit of getting it done when under pressure, at 26, Day is no longer a young gun and has to find a way.

Now seventh in the FedEx Cup standings he’ll be eyeing a win next week in Boston where he’s gone close a couple of times. If successful, it would set up his tilt at the US$10 million dollar bonus a fortnight later…a the perfect way to end all the doubt.