Three Majors in 2014, three impressive winners, but Rory McIlroy’s was different as it was met with great excitement and fanfare. Why? X-factor – the Northern Irishman has golf bags full of the stuff.

Masters champion Bubba Watson has some, but his attitude lets him down while US Open winner Martin Kaymer exudes next to none, but boy can he play. McIlroy though trumps them both and showed why numerous times during his two-shot wire-to-wire victory at Royal Liverpool. 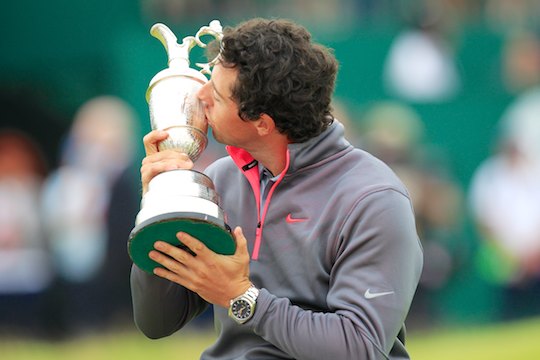 At 25, he’s just The Masters shy of a career Grand Slam, it’s another pointer to his undeniable talent. Only Tiger Woods 23, and Jack Nicklaus 24 achieved the feat earlier in their life. See the company he’s keeping?

A career is defined by major victories and the Northern Irishman now has three – 2011 US Open, 2012 PGA and 2014 Open Championship – all emphatic wins. Jason Day, a player almost equal in ability and age has none, that’s how difficult they are to win.

Sure he was on the right side of the draw, but that’s golf… it evens out over a career. But when McIlroy was tested he responded in the way only the greats can, by taking it to another level.

Midway through round three he momentarily shared the lead with Rickie Fowler, something he’d held from day one. Then with five holes to play he put it into overdrive and opened up a six shot buffer, delivering the knock out blows with eagles at 16 and 18.

What illuminates that effort is no one else in the field had made an eagle at either of those holes… all day. It’s the stuff of legend, what moves the needle, what excites the fans and why this victory was admired.

On the final day Sergio Garcia made a charge and got within two after an eagle at 10, but despite it being tense at times McIlroy always had a buffer. Rickie Fowler held firm to tie the Spaniard for second; however, this was always McIlroy’s week.

We adored Tiger Woods’ for his many dominant performances in the big ones. Instead of them being viewed as boring, we ask ‘how low can they go?’ ‘How many shots can they win by?’ Fans can’t seem to get enough.

For all the things Rory has already achieved in his short but brilliant career, it’s his honesty, which is his best quality. Fans want authenticity from their heroes these days and it’s what sets McIlroy aside from Woods.

Over the past two years, he’s been to hell and back with lawsuits and contract disputes and just two months ago, he had to face the embarrassment of calling off his engagement to Caroline Wozniacki. Instead of going to ground and saying nothing, Rory owned up, accepted it was his fault and moved on. It’s how he has handled all his mistakes both on and off the course.

In Adam Scott, we have the world number one golfer, but even the most patriotic Australian wouldn’t argue that at their best, McIlroy is on another level. Congratulations Rory McIlroy – Champion Golfer of the Year 2014.