Luke Elvy: Nothing Elementary About This Watson

Bubba Watson is in rare air now. Its one thing to win a Green Jacket, but two in three years – that’s incredible!

The scary thing is, he looks like he is going to win a few more. If that happens he’ll be in the company of Masters legends Jack, Arnie and Tiger. 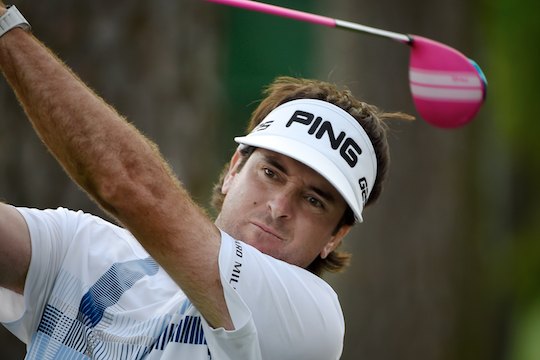 Bubba Watson tees off at the 2014 Masters (Credit: Matt Harris)

It’s not that he won this week at Augusta National it’s how he did it. I called three of his four rounds on Featured Group 2 for CBS on their digital platform and the potency of his driver is mind-boggling. He barely missed a fairway.

In 1997, Tiger Woods humbled the famed tournament layout, hitting many short irons into par 5s which prompted the membership to make changes to the course. Tom Fazio was given the duty of lengthening many of the holes in 2001 to “Tiger proof” The Masters.

It’s had the adverse affect, minimising the number of players who can actually win. Only brutal weather conditions allowed shorter hitters like Mike Weir, Zach Johnson and Trevor Immelman to slip into a Green Jacket since the changes.

However, when the weather is good, like it was this past week, it plays right into the bombers hands. Think Cabrera, Mickelson and Scott. Bubba though is on another level.

His ability to hit the ball astonishing lengths while shaping it both ways gives him a weapon no other player possesses. Over those three rounds he hit clubs into greens most will only dream of. His drive on 13 in the final round was farcical.

With firm and fast greens that have all sorts of undulations, he’s hitting wedges or short irons with plenty of sideways spin. It takes away the defence of the course, the need for precision on the second shot. Even a moderate display on or around the greens is enough to get the job done.

The other weapon Watson has is he’s left-handed. It took 67 years for a lefty to win at Augusta, but in the last 12 Masters since – Weir, Mickelson and Watson have combined for six Green Jackets. Why? I’ll leave it to Scott McCarron my co-commentator this week to describe.

“Augusta National favours a right to left ball flight, for a left-hander that’s a fade. A fade allows the ball to stop quicker on these greens and when Bubba is hitting it the lengths he does, there’s no one who can compete with him.”

20 year-old young gun Jordan Spieth did a pretty good job trying to, but in the end he was left fighting himself. And while we were robbed of the thrills that come on the back nine on Sunday, you simply have to admire Bubba’s ball striking display – there’s nothing elementary about this Watson.

Unfortunately, Australia didn’t get to celebrate back-to-back Green Jackets, but we did have two of our seven strong contingent in Butler Cabin on Sunday and that should be applauded.

Adam Scott was a statesman throughout his year as Masters Champion, there’s not one person he didn’t impress. Also congratulations to Oliver Goss for claiming low amateur honours, he’ll never forget the way he celebrated his 20th birthday.

John Senden deserves a special mention as well for his best Masters performance – tied 8th. Australian golf is in strong shape, the turning point was this time last year… may it long continue.