Luke Elvy: Nothing Finer than Kaymer

First let’s get the obvious out of the way – what a performance by Martin Kaymer, astonishing really. Made a mockery of one of the most challenging tests in championship golf to win by 8 strokes. That’s Tiger-esque, but it certainly wasn’t treated that way.

I hope history reveres this achievement because at the time it wasn’t been marvelled by the masses the way it should be. It was pure German precision by the now two-time major champion who took control of the tournament on day one and never looked back. 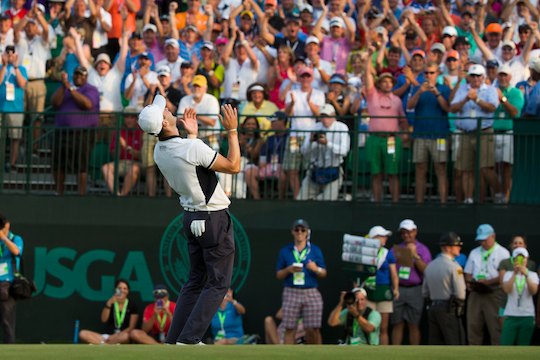 Martin Kaymer reacts after making his putt to win the 2014 US Open (Credit: USGA/Michael Cohen)

CBS commentator Peter Kostis tweeted midway through the final round, “If Tiger was doing what Kaymer is doing everyone would be going bonkers, but with Martin they say it’s a boring tournament. Double standard.” Spot on. Why weren’t his efforts lauded like the champion he is?

Golf keeps searching for the next Tiger Woods, but week in week out we have Woods-like performances by a raft of players and they get glossed over. Stop what you’re doing and acknowledge this stat – Kaymer finished 9 under par when the next best was one under!

I was hosting Network Ten’s US Open coverage in 2011 when Rory McIlroy blew away the field by the same margin at Congressional. The rhetoric was immense, everyone was celebrating the game’s latest superstar and rightly so, it was a remarkable performance.

But why has Kaymer missed out on the appropriate praise? Is it because he’d already won a major? Been world number one? Or German? If you have played Pinehurst No.2 you’d understand just how brilliant his play was.

So confident was I that the winning score would be over par this week, I bet two friends a round at an elite course on me if someone broke it. Take Kaymer out of the equation and it was almost an astute bet.

Sure I hadn’t factored in rain softening up the greens the way it did over the first two rounds, but over the weekend you saw the true Pinehurst.

“I played very solid the first two days and that gave me a very nice cushion for the weekend but to shoot only one over par on Saturday and Sunday is good.” Kaymer said in his trophy presentation interview.

Remember where this performance has come from as well. At the end of 2010 and just 26-years-old, Kaymer was the game’s most recent major winner and world number one, he literally had the world at his feet. Then he went to Augusta National and missed his fourth straight cut.

As a fader of the golf ball, he went about reconstructing his swing to ensure he could to hit a draw on command and compete at The Masters. It sent his game into downward spiral and he dropped to 61st in the world. But slowly, he began to see improvements and rebuild his confidence.

He credits holing the winning putt at the 2012 Ryder Cup as a big step, but this year it has really come together. Amongst a myriad of milestones Kaymer has set, he has become the first person to win The Players and US Open in the same year, two of the games toughest tournaments.

Now still six months shy of turning 30, he’s had a Hall of Fame career. And while Tiger’s 15-shot win at Pebble Beach in 2000 is the benchmark for most dominant major championship victories, Kaymer’s effort at Pinehurst No.2 should be in the conversation of next best…it was that good.