As far as drama packed finishes go, the 2014 Australian PGA had it all – the hero (Adam Scott), his mate and maturing star (Wade Ormsby) & the grinder (Greg Chalmers). Given it went a record seven extra sudden-death holes, it’s no wonder “the grinder” was last man standing.

The seeds to Chalmers second PGA victory weren’t planted with a peerless final round 64, nor were they sewn by his putter… it was the culmination of another year of hard work. It is all he has ever known. 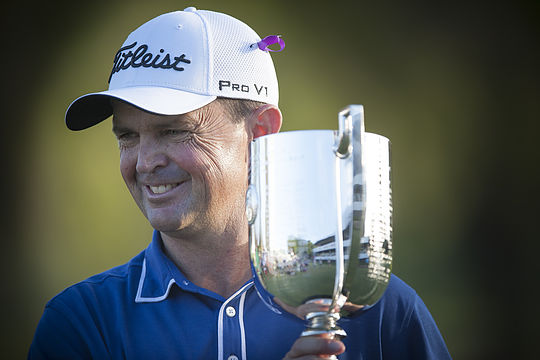 You see Chalmers is the antithesis of the man he ultimately beat. He’s not blessed with a glorious swing, male model looks or a presence that is the envy of the golfing world. The 41 year-old’s had to scratch and claw for everything he’s earned.

He’s dug more holes in the driving range dirt than any other Australian player I’ve known. And while winning in not new to him, his recent journey is a story to behold.

When people think of PGA Tour players, or duel Australian Open champions they think they’re so rich, life is a breeze. Sure the lefty has made a good living from the game, but he’s a long way behind the games elite.

He walks virtually anonymously around every PGA Tour event he plays in, there’s nothing flashy about his game or persona that attracts an audience. His claim to fame in the United States is “scrambling guru”, but watching a guy get up and down around a green doesn’t move the needle.

Since he finished outside the top 125 on the FedEx Cup standings in August, he’s had to spend the past three months playing for his future. That’s included the Web.com Finals, three PGA Tour starts that weren’t guaranteed, plus the four Australasian PGA Tour events.

He’s flown from Dallas (his base in the US) to Malaysia to Perth, to Dallas to Mississippi to Mexico to Dallas to Melbourne, Sydney & the Gold Coast. It’s never privately and very rarely at the front of the plane, he also did it minus wife Nicole and sons Lachlan and Max.

In 12 weeks, he’d spent the grand total of four days with his wife and kids, the rest was spent grinding on the road to make his families future better. That’s not to discredit what commitment Scott makes to the game, it’s completely different, the third man in the playoff would find it easier to relate.

Ormsby has travelled a similar path to Chalmers over the past decade and until last year’s win in India had struggled to reach his potential. But this year in Europe, he became the player he’d always promised to be. A win on Sunday would have been the perfect way to finish his best year yet.

That five footer on the second playoff hole will go through his mind often over the Xmas break, but I hope he takes the positives from how well he played rather than the missed opportunity. He’ll most likely seek answers from his mate Scotty, but perhaps he’d fare better learning from Greg Chalmers.

That’s it from me for the year… I hope you found my columns to be insightful and worth your time. I wish you and your family a safe and happy summer and look forward to bringing you closer to our stars in 2015.