Let’s be honest, for over a decade Australian golf has struggled in the post Greg Norman era. Not just in the professional ranks, right through the industry; sponsorship, TV ratings, mainstream media exposure, participation, retail – you name it, everyone has been doing it tough.

Such was The Shark’s enormous impact it was deemed impossible to fill his shoes, however in Jason Day and Adam Scott we’ve now got guys who fill one each. Not just in the way they play, but in the way they promote the game to the masses. Not that I’m the sole authority, but consider the void filled. 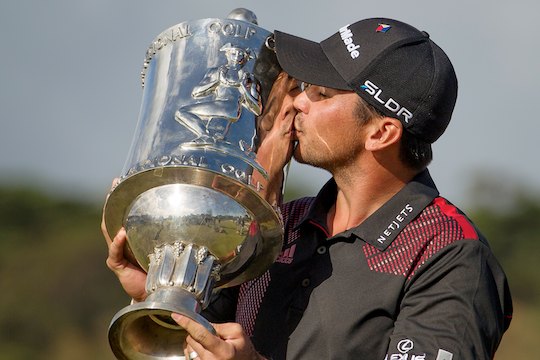 These past three weeks have only confirmed what these two have been doing internationally, and that’s representing Australia with distinction. This year alone, they combined to lead every major at some stage. Obviously Scott’s Masters victory was the moment, which changed things forever, yet Day is on the verge of his own major breakthrough. When that happens look out!

His win in the World Cup of Golf at Royal Melbourne, just a week after tragedy ripped through his family in the Philippines showed his mental toughness.

As Day will tell you winning on the PGA Tour is hard, but to do it when your mother has lost her mother and seven other family members in a devastating typhoon is courageous to say the least.

Closing is not something he’s been particularly proficient at since turning pro. His only win on the big stage happened over three years ago at the 2010 Byron Nelson Championship, and that was a nervy finish.

He’s had numerous opportunities to win since and didn’t and it was starting to become a monkey on his back.

Admittedly, for a 26 year-old Day has an exceptional record in the majors, but by his own admission “blew” the Masters this year. At Merion, he lead the US Open with 8 holes to go, only to stumble down the stretch.

Perhaps this will be the moment he looks back on as the turning point, just like Scott did when he won on home soil for the first time at the 2009 Australian Open. I truly think so.

Success breeds confidence and confidence breeds success, you can sense the positive momentum both players have.

While Australian’s love a winner, they want their champions to be good people as well. Pat Rafter was a shining example; Bernard Tomic is not. In Scott and Day, we’ve got two winners on and off the golf course. Ambassadors don’t come much better.

Listen to the way they speak. How often have you heard them talk about the pride they feel playing in front of, or for Australia. It’s not lip service they mean it, every word.

It’s time we stand up and take notice of what these guys are doing because it has given the game an enormous boost in this country at a time when we needed it. Thank you Adam Scott and Jason Day – we applaud you.

On a completely different level, but no less important for the confidence, congratulations to Aron Price on his breakthrough victory at the NSW Open. Price is one of the many Australian’s plying his trade on the US Secondary tour.

While there is a huge gap in prize purses between the Web.com and PGA Tour’s the talent pool can’t be understated and his triumph at Castle Hill not only got him a start at this week’s Australian Open, it will give him a boost for next year when he heads back to the States. Just like Day, Price needed to prove to himself he can win.

Belief is a potent thing, good luck Aron for this week and beyond, you deserve every success.