Luke Elvy: Story of the Week…It’s a No Brainer

Over the weekend we witnessed a contender for Finish of the Year, a former world no.1 end a long run of near misses and a classy German continue his incredible start to 2014. However, the story of the week?

It’s a no brainer… J.B. Holmes overcomes brain surgery not once, but twice to win again on the PGA Tour. 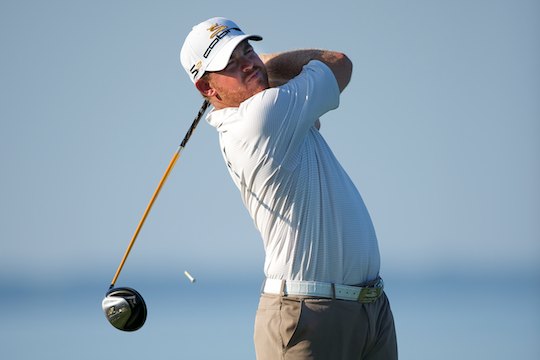 Great stories are what inspires people and attracts audiences to the game and this week each tour had a beauty. Let’s go through them as they happened.

In Singapore, Chile’s Filipe Aguilar got hot down the stretch in The Championship at Laguna National – an event co-sanctioned by the European and Asian Tours. A final round 10-under 62 was punctuated by a holed wedge from 130m for eagle on the 72nd hole to snatch the title from Anders Hansen.

It may well be the Finish of the Year when it’s all said and done.

On the LPGA Tour, Stacy Lewis who finished T6 or better in seven of her eight starts this season, including three runner ups finally got the win she’s been threatening. With a bunched leaderboard heading into the last round, Lewis blew them away with a closing -7 64 in Texas.

Don’t forget this is a woman who has a rod and five screws in her back.

On the Champions Tour, Bernhard Langer delivered his usual German precision to become the 10th 20-time winner on the 50-and-over tour. What’s more incredible he’s finished no worse than T8 in eight starts in 2014 – two wins, three 2nds, a 3rd and T7.

For the 56-year-old to T8 at The Masters was further proof age shall not weary him.

Despite all those impressive stories, they don’t compare to Holmes who picked up his third PGA Tour title, but first since 2008. Life changed for the American when he withdrew from the 2011 PGA Championship in Atlanta with vertigo symptoms.

He was eventually diagnosed with structural defects in the cerebellum known as Chiari malformations and underwent brain surgery just a few weeks later.

All of that was a big enough ordeal, however doctors found he was allergic to the adhesive used on the webbed titanium at the base of his skull. He was airlifted from his home in Kentucky to John Hopkins Hospital in Baltimore for another surgery.

Without wanting to sound like Tim Shaw from Demtel, there’s more… his comeback to the PGA Tour early 2012 was thwarted by an elbow injury he suffered by returning too quickly. Holmes only opted to have surgery on it after he’d suffered a broken ankle. Geepers!

Now a little over two years later he bravely stands in the winners circle again and is exempt into next week’s PLAYERS Championship. It prompted a number of tweets of support from his PGA Tour brethren.

“Pumped for JB. Dude comes back from brain surgery!! Gives me hope that I can still comeback after a few hand surgeries. #nevergiveup” – Aaron Oberholser

“Respect to JB. Great to see someone play with perspective and gratitude after some health struggles. #WellsFargoChamp” – Justin Rose

Stories like this don’t often have fairytale finishes, but if you can excuse me while I put on my Hollywood hat, the PGA Championship in August is being played at Valhalla Golf Club in his native Kentucky. Holmes be 32 – the perfect age to win a major – omen anyone?