Luke Elvy: The Contradiction at Pinehurst

The US Open is often described as the least fun of all golf tournaments, it’s more of a grind than grand; players making hard fought pars replace the usual week-to-week birdie fests.

It will be no different at Pinehurst No.2 over the next two weeks for the Men’s & Women’s events, but you’ll also see a massive contradiction. 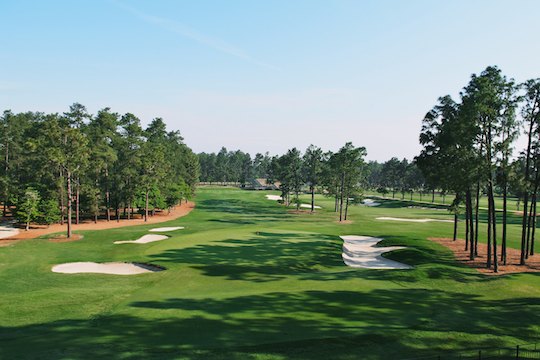 You see Pinehurst, the region, is one of the most peaceful places on earth. There’s a quiet amongst the giant Southern pines that instantly relaxes you and with 43 great courses in a 25km radius, it’s the perfect golf destination. Pinehurst Resort has nine courses alone, if I could live there I would.

I visited America’s ‘Home of Golf’ just before The Masters to do a reconnaissance ahead of this historic US Open double. I left amazed by the spectacular nature of the architecture of the grand old properties and its impressive golf courses. I also learnt how brutal Pinehurst No.2 can be.

Widely considered the masterpiece in famed designer Donald Ross’s 400 plus portfolio, the spirit of No.2 was tarnished somewhat by alterations to the course in the 70s to host future events. Deep rough replaced rugged waste areas and it was awarded the 1999 and 2005 Opens by the USGA.

While Payne Stewart’s last major win before his tragic death will long be remembered, particularly for his celebration, Michael Campbell’s upset victory over Tiger Woods was hardly a classic and sanity prevailed. A few years ago Pinehurst Resort commissioned successful designers Coore-Crenshaw to restore No.2 to its original look and ‘feel.’

The restoration completed in 2011 has been an overwhelming success and it’s back amongst the world’s best again. It challenges every aspect of your game and there’s no doubt the champions will have been the best player that week. You don’t get ‘lucky’ at Pinehurst No.2.

While fairways will be wider than usual for a US Open it proves a more strategic test and the waste areas, as my caddy told me, have been designed for “a third, a third, a third.” That being a third of the time you’ll have a chance to go for the green, some chance, or none at all. Looking back at my round that theory worked out about right.

However, it’s the incredible green complexes that standout at No.2 and most approach shots have next to no margin for error. As many of the greens sit higher than the surrounding land, precision is required – anything just slightly off and the ball will roll well away from the putting surfaces, often leaving treacherous up and downs to save par.

If you’re looking for players to back, favour the ones who have the ability to hit it long and straight, a cool head under pressure and a killer short game. Oh and they have to make a lot of putts inside 15 feet as well.

So while 156 of the world’s best golfers will have every inch of their ability and mind examined by one of the toughest courses in the world, those attending as spectators will be wondering through the place saying “how’s the serenity.”

That’s the contradiction at Pinehurst.