There were many people, including me, who had reservations about Royal Pines as an appropriate venue for the Australian PGA Championship, but I’m here to officially stand corrected. Hats off to the PGA of Australia, it worked.

Under pressure to find a suitable replacement to the much-loved Coolum on the Sunshine Coast, the PGA seemed to have backed a winner on the Gold Coast and the good news is – it should only get better. 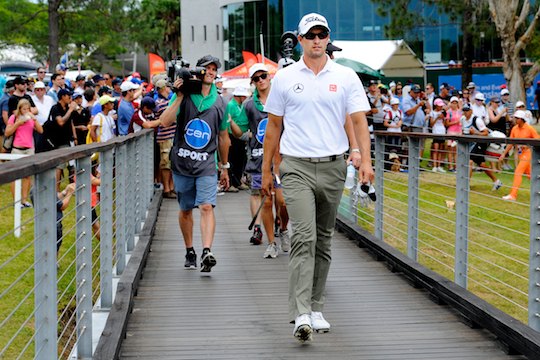 Forced to make a move from its spiritual home last year after Clive Palmer’s shenanigans made things untenable, the PGA struck a five-year deal with RACV. On top of committing to a yearly fee to host the tournament, RACV have promised to spend $5 million upgrading the course.

Let’s get a few things straight, as a golf course Royal Pines does not compare to Coolum, never will. Even when Graham Marsh is finished redesigning the greens and surrounding bunkers in two years time. It’s too flat and lacks genuine strategy to be a great layout.

Nor does it match Coolum as a resort venue. The joy of mingling with players and their families in the village is over as most chose to stay off the property, somewhere closer to the beach. That’s a big shame as Coolum had a real festival atmosphere, this year many players travelled without their families.

On the positive side Royal Pines had a great vibe during the day. The grass area between the hotel and 1st tee was full of great things to play, try or buy. Plus the players’ area was right there as well so fans could interact or simply hang around their heroes.

Speaking of which Adam Scott gets best on ground, players/player and man of the match all in one for his superb performance. He was nothing short of brilliant and has become an ambassador for Australian golf like Greg Norman was in his prime.

Not only did Scott power home to win his first PGA Title, he wowed sponsors on Tuesday night at the Tournament dinner, regaling them with tales from his historic US Masters victory.

The following day, hundreds turned up to see him presented with Keys to the City, by Gold Coast Mayor Tom Tate. Then on Friday he donned the Green Jacket after his round and posed for photos, signed autographs and had a quick chat with everyone who lined up. The guy does not stop giving!

The weekend crowds he attracted, with a little help from Rickie Fowler, were as good as we’ve seen since The Shark in the halcyon days. At times they were five or six deep watching the world number two do what he does best. And he didn’t disappoint.

Scott’s driving display on day one was, in his words, as good as he has ever hit it – I’d describe it as breathtaking. On day two, he grabbed the lead off Fowler and never relinquished it.

There were times over the weekend when he was threatened, but truly great players have an extra gear and Scott used it to power away after Sunday’s storm delay.

The pivotal hole was the par 5 12th, he played it in six under par, making two eagles and two birdies for the week. On the final day, he almost holed a four-iron from 220m for albatross, his first shot after a near two-hour rain delay. It was the signature moment of a classy display, ensuring he has now won all of the Australia’s Big Three – Open (2009), Masters (2012) & PGA (2013).

Now his mind turns to defending his Gold Jacket at Royal Melbourne this week.

If he wins, the Triple Crown, which Robert Allenby achieved in 2005, is well within his sights when he heads to Royal Sydney. Claim the World Cup in between and we could be witnessing a Scotty Slam.

Congratulations to all involved, it was a week to remember for Australian golf.