Luke Elvy: Will Adam Scott be our greatest?

We’re starting to run out of ways to praise Adam Scott, such is the magnitude to which he has excelled this year. But his brilliant play has prompted the question – will he be Australia’s greatest ever golfer?

In my opening stand-up for Channel 7’s Australian Masters coverage on the final day at Royal Melbourne, I suggested we pause and appreciate watching greatness unfold in front of our eyes. With Scott you just sense he’s at the beginning of a magnificent stretch that may last a decade. 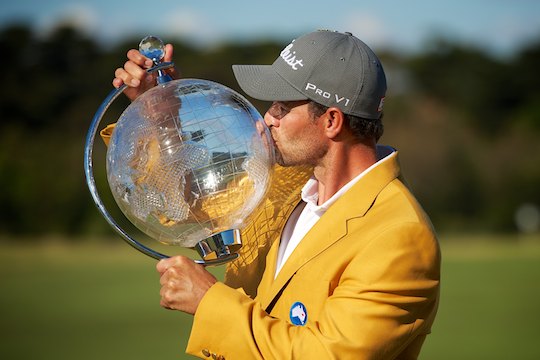 Will Adam Scott be our greatest? (Credit: Anthony Powter)

At 33, the world number two has matured into the player everyone thought he’d become, it’s just taken longer than expected. But isn’t it wonderful to see a person realise their full potential? How often can you truly say that about someone?

What the gifted Queenslander has done over the past three years is discover what works best for him, and then set about perfecting it. On the performances in the first two Australian events it appears that he’s very close. His driving is without peer, iron play as good as any in the world and when the broomstick is working, he’s unbeatable. It’s phenomenal to watch him ply his craft.

In fact, I’m trying to promote Adam Scott golf to the masses. In your next round, instead of teeing off, walk your ball 300m down the middle of the fairway and place it and play from there. That’s where he hits it, surely it’s an easier game and way more fun.

For some reason major championship victories are the way elite golfers are measured – surely longevity is a better judge – because of that mentality, Peter Thomson is our all-time greatest (comparing men & women is like comparing oranges & apples).

Greg Norman’s decade of dominance is overlooked for his failures in the big ones, which I staunchly disagree, but even the Shark feels Scott can become our greatest ever. Especially, now he’s found the secret to winning majors and I tend to agree.

Consider this, Scott is a year younger than what Phil Mickelson was when he broke through for the first of his five majors. Mickelson is 43 and won the Open at Muirfield this year, and we all know Lefty isn’t done with yet. So that’s a decade or 40 more majors for Scott to compile a similar career.

He’s now worked out the keys to Augusta so he’s got to be good for another Green Jacket or two. He almost won the last two Opens and he’s been in the thick of the past three PGA’s. In the last 12 majors he’s had 7 top 10s, 5 of them were top 3s, it’s safe to say he’ll contend in at least a dozen more and that’s probably down playing it.

So if the discussion “will Adam Scott be our greatest?” has started, let me be on the record as saying yes. But like all these questions, the real answer is only time will tell.

Before I go, I can’t leave without praising Jarrod Lyle. In 20 years in the media, I’ve never covered a more heroic story. To simply beat cancer for a second time is an extraordinary achievement, but to make the cut in his first event back after 21 months enduring chemotherapy hell most of us truly can’t comprehend is extraordinary.

To get a little run going on the weekend shows that when 100% fit again, Lyle will again be a force on the PGA Tour and we wish him well. While Adam Scott was awarded the Gold Jacket as Masters champion this week, we all know whom the real winner is. Congratulations Jarrod, you’re an inspiration to us all.