It has taken 13 years, but New South Wales star Karen Lunn is back in the winner’s circle following her win in the recent Portugal Ladies Open.

Lunn fired a superb final round of seven-under par 65, including a clutch birdie putt on the last hole to secure a one-stroke victory over England’s Trish Johnson and Denmark’s Iben Tinning. 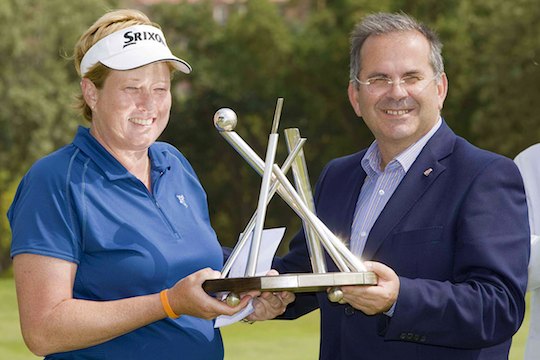 She has been on Tour for 26 years now and last won an official LET event in 1997 when she claimed both the Amex Tour Players’ Classic and Ladies French Open.

These wins came four years after she won the 1993 Weetabix Women’s British Open and the Order of Merit that same year.

“It was a real rollercoaster ride,” Lunn said after her latest victory.

“I was nervous but I knew that I was playing well. It’s been a long time and 1997 was my last official win in an LET event. I’ve won a couple of smaller events on the Australian Tour.

“I’ve always felt I could win but you do wonder if it’s ever going to happen again.”

Lunn credited Karrie Webb as her inspiration, whom she partnered in the Comunitat Valenciana European Nations Cup in Spain in April.

The pair tied for second place behind Sweden after a three-hole sudden-death playoff. “I think I took a lot away from the Nations Cup, playing with Karrie,” she said.

“I played really well that week and she was really encouraging. She said to me, ‘You should take a lot away from this week and go and play well. You should be winning tournaments,’ and that was great. I think I took a lot of confidence from that and I’m not sure I’d be standing here if I didn’t have that experience.”