The opening round of the $1.5 million Australian Open didn’t lack any excitement and controversy.

Tour journeyman Jarrod Lyle is the surprise leader after a stellar 7-under-par, 65, to be one stroke ahead of Americans, Dustin Johnson and Nick Watney. 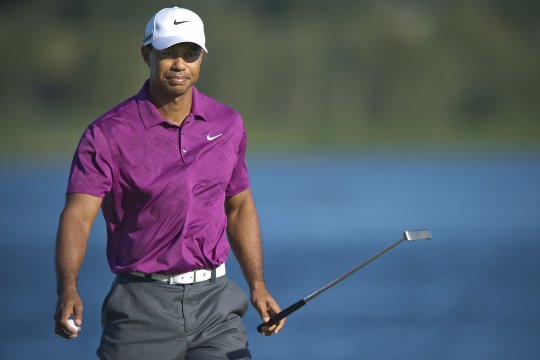 Tiger Woods is in a tie for 9th position after the opening round of the Australian Open in Sydney. Photo: Anthony Powter

Lyle, 30, may be ranked 472 places below US world No.5 Dustin Johnson but it meant little today.

Lyle’s opening round is a ‘feel good’ story following the loss of his US PGA card last month after finishing outside the top 150 on the money list (167). He will have to fight his way back through the six-round final stage of the Tour School from November 30 in California.

Today’s opening round will be the confidence boost Lyle was after with the likeable Aussie quickly becoming the sentimental tournament favourite.

In contrast, John Daly was back in the headlines for all the wrong reasons.

Three years after smashing spectator’s camera at the Australian Open, Daly made another incident at the tournament. And probably for the last time.

The American left the course at the Lakes Golf Club in Sydney after an outburst on the eleventh hole. The incident was ignited when the two-time major winner carded a triple bogey 7 at the previous hole, apparently with Daly claiming he had run out of golf balls.

Australian Open officials condemned the American’s behaviour and suggested he had played the tournament for the last time.

PGA of Australia chief Brian Thorburn released a statement confirming Daly’s invitation to the PGA Championship from November 24-27 had been withdrawn.

Tiger Woods kept his loyal fan base on their toes firing a 4-under-par, 68, to be in a six-way tie for 8th alongside a group that includes talented amateur Jake Higginbottom.

Woods, preparing for the Presidents Cup next week at Royal Melbourne, is attempting to end a two-year winless streak. His last victory was at the Australian Masters in Melbourne in November 2009.

Geoff Ogilvy began his title defence with two birdies in the first three holes, but dropped a shot at the 14th to make the turn at one under. Three birdies on his back nine had the 2006 US Open champion finishing at two under in a share of 20th.

Australia’s President’s Cup captain Greg Norman managed to sneak under par with a birdie on the eighth to finish at one under.

His counterpart for the President’s Cup, Fred Couples, bettered Norman with an impressive 5-under-par, 67, to be in a tie for 4th with Steven Jones, Greg Chalmers and Newcastle’s James Nitties.