Lynch: Badds master of his own destiny

Fresh off a PGA Tour win in February and a top 5 finish at the Shell Houston Open, Aaron Baddeley’s swing coach Dale Lynch has declared his man ready to become Australia’s first US Masters champion at Augusta this month.

Asked if Baddeley could prevail at Augusta given his added length and supreme putting, Lynch replied: “Yes. For those reasons and he now can hit all the shots required there.” 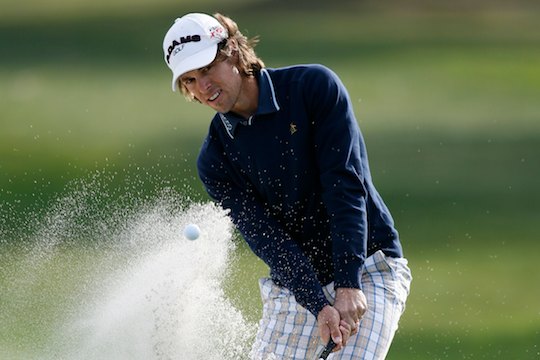 Baddeley’s win at the Northern Trust Open in Los Angeles in February was his first victory anywhere since the 2007 Australian Masters but it came as no surprise to Lynch.

“He thrives in the last group on Sunday,” Lynch said.

“He’s only missed two cuts on the PGA Tour since (last year’s) US Open. He was top-10 in greens in regulation the previous two event. Riviera (in Los Angeles) is a course that suits ball-strikers.”

The win in February was the first professional win for team Baddeley/Lynch since before their 2003 split and Lynch said it is just reward for the pair’s hard work.

“It is validating not just the win but more the way he played becoming a quality ball striker again,” Lynch said.

The 30 year-old Victorian won two Australian Opens as a teenager with Lynch and underwent two major form slumps before rekindling the partnership in early 2009.

“After Doral in 2009 he was frustrated with his game,” Lynch said.

“He was having trouble controlling trajectory and he had lost a lot of distance.

“There is a possibility that the things he has learnt through the lean period will one day make him a better player.”

Baddeley reached No.18 in the world in 2007 applying the less-powerful ‘stack and tilt’ swing philosophy but chose to return to the old Lynch swing model which some argue is more natural.

“We have rebuilt his swing for the future and ‘AB’ never took his focus away from the big picture,” Lynch said.

Lynch said further success on the PGA Tour awaits Baddeley whose win in February put him in a group with Anthony Kim, Hunter Mahan and Sean O’Hair as the only 20-somethings with at least three PGA Tour wins.

“He is still very driven, works extremely hard and has the talent (to succeed on the PGA Tour),” he said.

“We need to make sure he has the tools that allow him to reach the lofty heights expected.”

The world No.74 played regularly on Melbourne’s sandbelt as a teenager and Lynch said he would be a tremendous asset for the Internationals at the Presidents Cup at Royal Melbourne in November.

“Making the team this year has been at the forefront of his mind since the start of the year,” Lynch said.

“The win (in Los Angeles) gives him a chance of playing his way on the team and Royal Melbourne suits his game.”