Ryan Lynch has taken the lead in round one of the QLD PGA Championship following an incredible eight birdies and an eagle in rain-marred conditions.

Beginning his round on the back-9, Lynch fired an eagle on the par-5 10th to get his Championship off to a strong start to eventually sign off with an 8-under 62. 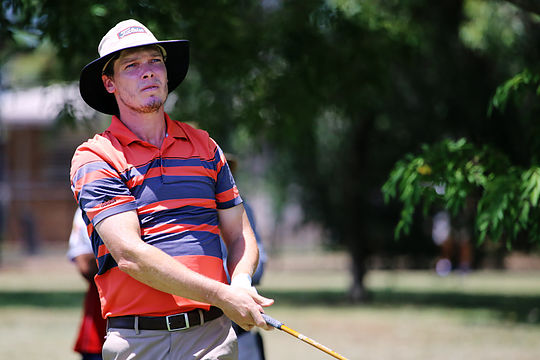 Early into the afternoon round heavy rain and lightning brought the field into the clubhouse for a short break before returning to the course 50 minutes later, but the delay did little to dampen Lynch’s spirits.

The front-9 was where it all came together for the Victorian, rocketing to the lead with birdies on holes 1, 2, 4, 5 and 6 to pass morning leaders Harrison Endycott and Ben Ferguson.

“I lost count,” said Lynch of the number of birdies he recorded on the City Golf Club layout.

“But the putter was rolling nicely and I was hitting a lot of nice shots, so I’m just happy to be sitting here at the moment, right in the tournament and we’ll see how the rest of the week goes.”

Earlier in the day rising stars Harrison Endycott and Ben Ferguson set the benchmark for the field, firing 7-under 63 in the morning.

“Three birdies in a row, I haven’t done that for a while so it was nice to do that,” said Endycott.

“They were really nice looks and it felt very positive to make those going into the round so it’s always nice to start with some good momentum.”

West Australian Ben Ferguson joined Endycott at the top of the leaderboard after an almost blemish free opening round at the QLD PGA Championship.

“I got off to a good start and had a few birdies, I made a bit of a rally and continued it but unfortunately got a little bit unlucky on the last,” said Ferguson.

Former PGA Tour player Nathan Green also equalled the 7-under par score in the afternoon field in his first tournament for 2019.