Taylor Macdonald today edged ahead of Andrew Martin after three rounds in the final stage of the ISPS HANDA PGA Tour of Australasia Qualifying School presented by Cobra Puma Golf.

After a nervous start at Sandhurst Club, the Queenslander quickly found form and shot the best round of the day, his 65 making him 16-under the card with a one shot buffer between himself and Martin. 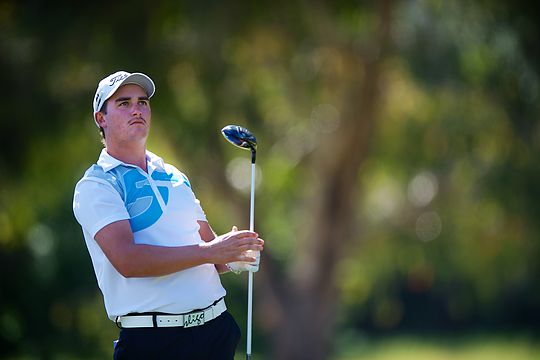 “I started a bit scratchy but I played really well. I was a little bit nervous but I holed a good putt on the second to get me going,” Macdonald said who had just 12 putts on the inward nine holes.

“The back-9 was a lot of fun, I hit it well and holed a lot of putts. I kept hitting good shot after good shot and putting really well, it was a good round altogether.”

Martin, who has had trouble finding his groove off the tees this week, finally figured out where his swing was going awry to post 4-under 68 again to be 15-under the card heading into the final round.

“Today has been my better of the three rounds, I was hitting a few more greens so I didn’t have to scramble as much,” Martin said.

“I didn’t birdie many of the par-5’s and that can make it feel like you’re not scoring, I kept patient and the birdies started to come on the back-9.

“Overall it was a pretty patient round for me even though I hit it the best I have out of the three days.”

Despite being grouped with Macdonald who was applying pressure to the Victorian’s lead all day, Martin remained focused on his own game.

“I’ve been putting well so he didn’t deter me too much, it was good to see him hole some good putts.

“Today I was just playing my game and letting the round unfold, I know there are plenty of chances out there for me to make up ground,” Martin added.

Martin is still well in touch of the 20-under score he set for himself after 72 holes and is confident it’s still an achievable goal with one day left to play.

“I think it (20-under) is still achievable, Taylor hit 7-under today which is good scoring, if I play as good as I did today and some putts start to drop for me I think I can get there.”

Josh Cabban today secured outright third position, three shots back from Martin on 12-under the card.

“I didn’t get off to great start, I had a bogey on the second but then I played well, I’m chipping and putting really well at the moment,” Cabban said.

“I haven’t played the best the last two days but today it was a nice change to hit the ball on to the course itself and get some results.”

Christopher Wood bounced back from a disappointing second round after a promising start to the tournament; he scored 68 today and sits in fourth position on 11-under the card.

“I got off to a bit of a slow start off the front-9, struggled with my swing and putting a little bit, but I figured it out on the back nine and came home strong,” Wood said.

“I managed to limit the damage from round two and I’m still in contention to finish strong so hopefully after another good round I’ll be up there.”

Rounding out the top-5 after three days play is Victorian David McKenzie who rocketed up the leaderboard thanks to a 6-under 66 today.

The tournament also saw its second hole-in-one in as many days when New Zealander Fraser Wilkin aced the par-3 11th on the Champions Course using his 48 degree pitching wedge.