The Oban lefty came from three back at the start of the final round posting 10 birdies in sizzling last day 64 for a 14-under tally before being joined at the top by US Open champ Matt Fitzpatrick (67).

The pair returned to the 18th tee and while Fitzpatrick complained of being distracted on the tee by photo-snapping fans, he found rough with his second with MacIntyre taking full advantage with a two-putting winning birdie. 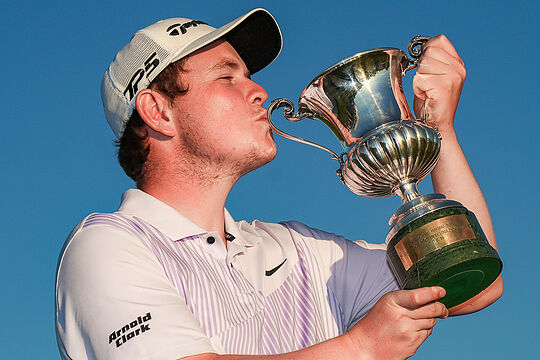 “But I spoke to the right people and there’s so much hard work gone into this, my caddie, family, friends, absolutely everyone, Scott, a few weeks ago, Scott Forsythe. My approach play has just gone up a notch and it’s shown today

“I hit terrible shots for bogeys on 14 and 15 and was back against the wall, and again, just got one with my dogged attitude of never give up, if I get punched, I punch back.”

“The birdies on 16 and 18 were massive and thankfully I got in the playoff”.

And after going so close to gaining automatic European Team selection a year ago at Wentworth, MacIntyre could do no better this week than win on the 2023 Ryder Cup host course and do it impressively in front of the European captain, Luke Donald.

In winning a second Tour title, MacIntyre not only denied Fitzpatrick but also World No. 2 Rory McIlroy who never recovered from a first hole double-bogey and also finding water at 17 in signing a 68 for fourth spot at 12-under and just two strokes out of the playoff.

French star Victor Perez let slip making the play-off in missing a short putt for birdie at the last in his round of 66 to be third on 13-under.

MacIntyre is now the fourth Scotsman to win this year on the DP World Tour year joining double-winning Ewen Ferguson along with Richie Ramsay.

Victory brilliantly also curbs MacIntryre’s downward slide on the World Rankings moving from an 111th to an expected World No. 80.

He also became the 10th Scottish-born winner in this year’s 79th hosting of the Italian, and a first since Paisley’s Dean Robertson won by a shot in the 1999 event in Torina.

Australia’s Lucas Herbert topped the Australians with a brilliant 5th place effort. Herbert carded rounds of 70, 67, 68and 68 to finish alongside Aaron Rai on 11-under.

Jason Scrivener and Maverick Antcliff were the only other Aussies to make it through to the weekend in 55th place.