Jay Mackenzie has collected his maiden victory on the PGA Tour of Australasia taking out the Western Australian PGA Championship at Kalgoorlie Golf Course on Sunday.

Mackenzie shot a final-round 68 to pull away from Austin Bautista, with whom he shared the overnight lead, for a two stroke victory finishing at 19-under par and in the process securing a two-year tour exemption. Mackenzie’s previous wins have been in Pro-Am’s since turning professional three years ago.

“I felt pretty good,” said Mackenzie about the victory. “I tried to laugh at everything and not worry about anything. It seems to work for me. He (Bautista) came out swinging. I holed a few good putts, heaps of good putts, actually. They just fell my way. I’ve got a job for another two years so it means a lot.”

Bautista, who was also seeking his first Australasian Tour win, was 3-under through four holes but ultimately shot a 2-under par 70, missing his short birdie attempt at the last. He finished at 17-under, a shot ahead of third-placed New Zealander Ryan Chisnall. 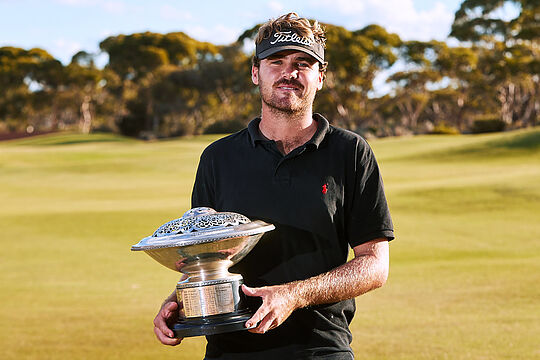 Australian PGA winner Jediah Morgan still holds the top spot on the Order of Merit in an unassailable position with A$190,408, with Blake Windred moving into second standings at $124,573. The pair almost certain to obtain European playing privileges by holding two of the top-three rankings at season’s end next month.

Andrew Dodt and Dimi Papadatos are head to head chasing after the much sort after 3rd ranking spot, which also gets playing rights in Europe, with Dodt just ahead on $111,230 with Papadatos sitting on $105,618.

The Australasia Tour moves to Perth for the Western Australian Open at Royal Fremantle starting on Thursday.